He added that Kuwaiti-Sino relations have been greatly developed over 50 years in various cooperative domains, pointing out harmony between Kuwait Vision 2035 and China’s Belt and Road Initiative. The foreign minister boasted that Kuwait is the first Gulf and Arab country to have signed a memo of understanding for cooperation with China in the Belt and Road Initiative, which was launched in September 2013. He also spoke highly of existing cooperation between both nations at international fora, hoping that this could continue at all levels. On his part, Chinese State Councilor and Foreign Minister Wang Yi conveyed the greetings of Chinese President Xi Jinping to His Highness the Amir, government and people of Kuwait. He said his country is proud of close friendly relations and existing strategic partnership with Kuwait in all fields.

He added that amid the multiple and major changes the world is undergoing, Sino-Kuwaiti relations of all-out strategic partnership have been becoming firmer and closer. Wang highly commended Kuwait’s wisdom and balanced policies as well as efforts to maintain regional security and peace, applauding Kuwait as a close friend of China. During the official talks, both sides considered close ties and mutual highlevel visits and meetings, the last of which was by Yang Jiechi, a member of the Political Bureau of the Central Committee of the Communist Party of China and director of the Office of the Central Commission for Foreign Affairs, to Kuwait in February 2021 and the meeting between both Kuwaiti and Chinese foreign ministers in the Uzbekistan capital of Tashkent on July 16, 2021.

They also looked into ways of creating fresh horizons for joint cooperation in various sectors at the behest of both countries’ leaderships, in addition to response to the novel Coronavirus (Covid-19) pandemic. Both sides finally discussed the latest regional and international developments and exchanged views on a set of issues and subjects that concern both nations. (KUNA) 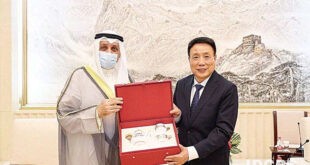