KUWAIT, April 23: The renowned Professional Association of Diving Association (PADI) granted Kuwait Center for Diving a certificate of distinctiveness as one of the accredited clubs by the international organization. The grant was designated for the club during a visit by Captain Firas Jundi, PADI’s regional director. Jundi said number of divers who joined PADI’s training courses in the recent years increased in Kuwait.

The Kuwaiti center is one of the most significant centers accredited by the international organization, he said, adding that Kuwait along with the other GCC countries made positive results in the scuba diving sector. Two persons in Kuwait had obtained the title “coach of the coaches,” including Captain Meshari Al-Khabbaz from the center. Jundi said scuba diving centers throughout the world have overhauled their digital facilities, systems and applications, adding that some of the training programs have been secured in the Arabic language.

Meanwhile, Capt. Khabbaz said he was proud of the center’s earning of PADI’s certificate and affirmed that the diving sports has noticeably developed in Kuwait, recently. PADI is the first agency in the world that applied electronic education in diving training, he added. Capt. Khabbaz added that the international organization, this year, granted him the title, “manager of the course for training instructors — golden — 2022,” for the fourth time, noting the center success in training a large number of divers, passing tests held under under PADI’s supervision. (KUNA) 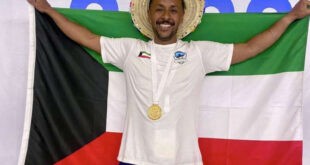