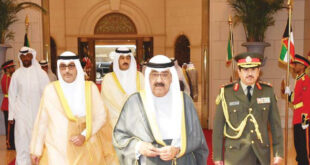 This post has been read 15767 times! Ahmed Al-Jarallah Editor-in-Chief, the Arab Times WITH the …