KUWAIT CITY, March 15, (KUNA): Kuwait Airways signed Thursday a codeshare agreement with Lebanon’s Middle East Airlines for an open and unlimited capacity, which is slated for implementation on March 25.

The deal would allow passengers to choose among 24 weekly flights between Kuwait and Beirut and vise-versa on board of the two companies’ planes, Kuwait Airways Chairman Sami Al-Rasheed told reporters on the sidelines of signing the agreement. Currently, Kuwait Airways operates around 11 weekly fl ights, while MEA operates 13, Al-Rasheed added.

For his part, MEA Chairman Mohammed Al-Hout stated to the press the agreement would contribute significantly to boosting joint cooperation between the two companies, pointing out the solid brotherly relationship between Kuwait and Lebanon. MEA is willing to boost cooperation with Kuwait Airways in operating other different routes far away from Beirut and Kuwait, Al-Hout affirmed, adding his company would also provide several privileges for passengers flying via both companies. A codeshare agreement is an aviation business arrangement where two or more airlines share the same flight.

Each airline publishes and markets the fl ight under its own airline designator and flight number as part of its published timetable or schedule. Kuwait Airways was established as a private company in 1953, and considered as one of the oldest aviation companies in the Gulf region.

In 1962, the Kuwaiti government acquired 100 percent of its ownership. Established in 1945, MEA launched its first service from Beirut to the neighboring cities of Syria, Cyprus, and Egypt. Currently, the company operates its services to around 25 destinations. The Central Bank of Lebanon owns 99 percent of MEA. 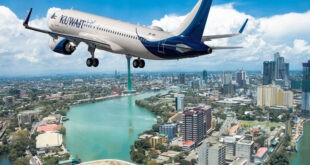