SEOUL, May 23, (AFP): Beyond the gleaming towers of modern high-tech Seoul, it is the dark past of South Korea’s years of dictatorship, violence and upheaval that have inspired the country’s staggering rise as a cinematic powerhouse.

No fewer than five South Korean movies are showing in the elite selection of this year’s Cannes Film Festival.

And Bong Joon-Ho’s Netflix creature feature “Okja” is one of the early favourites for its top prize, the Palme d’Or.

But two of the other Korean films in competition are crime and action thrillers typical of the booming “Korean noir” genre.

Films about bloody crimes, gangsters and corruption, often with a political edge, have swept box offices and film awards, winning praise for gritty stories about the dark underbelly of society.

“The Villainness” portrays a female assassin trained as a killer at a young age by a crime ring.

She seeks a new life by working for the South Korean government with a licence to kill.

“The Merciless” has two former prison buddies trying to climb the ladder of the gangster world, where lying, cheating, backstabbing and violence are norms.

“South Korea has such a turbulent modern history ridden with violence and political, social upheavals… I think that may be why we are good at making thriller movies like this,” said Jung Byung-Gil, director of “The Villainness”.

“With the military dictatorship that ruled for decades and widespread corruption… reality is a fertile ground for so many interesting stories,” he told AFP.

The South has gone through a stunning transformation in recent decades, going from from a war-ravaged backwater poorer than Ethiopia after the 1950-53 Korean War to Asia’s fourth-largest economy.

Its political history is an equally hectic roller coaster. Before the democratisation of the 1990s, military rule from the 1960s to the 1980s saw tens of thousands killed or tortured — all against a backdrop of perennial tension with North Korea, now nuclear-armed.

At the same time its vibrant entertainment industry has taken Asia by storm, with its television dramas, movies, K-pop songs and stars enjoying loyal followings across the region and beyond.

Jung, 36, made his name with a series of action and thriller films, including “Confession of Murder”, loosely based on a series of murders of young women in rural Hwaseong in the 1980s.

The serial killer was never found, and his crimes also inspired Bong’s award-winning 2003 “Memories of Murder”, which highlighted the repressive social atmosphere under the army rule of the time.

Despite South Korea’s rising stature in world cinema, its directors have limited resources, forcing them to be “more creative and more spontaneous”, Jung told AFP.

“We don’t have huge investment or world-class technology like Hollywood. So we try to create scenes that feel more real, raw and alive than CGI-ridden US blockbusters,” he said.

The style first gained global traction with “Oldboy”, an emblematic mystery thriller by Park Chan-Wook — a Cannes judge this year — which won the Cannes Grand Prix in 2004.

The movie, about a man seeking revenge after being imprisoned by a captor for 15 years, won rave reviews for its cut-throat, unrelenting scenes of violence and sombre, bleak cinematography.

Many other moviemakers followed suit with their own bloody thrillers.

Recent examples of the genre include 2015’s critically-acclaimed “Inside Man”, which detailed cosy and corrupt ties between the elites of Seoul’s business, political, media and criminal worlds.

“The King” — a recent swashbuckling political drama about corrupt, power-hungry prosecutors — features shamanistic rituals in which powerful political figures pray for the defeat of a presidential candidate.

After it was shot, the real-life corruption scandal that eventually brought down president Park Geun-Hye emerged, centred on her secret confidante Choi Soon-Sil — the daughter of her shady former mentor, a seven-times-married former shaman himself.

Like an advancing army in a historical epic, the world’s film studios are massing on the frontier of China’s movie market, desperate to conquer the other side of the Great Wall.

At the Cannes Film Festival, it’s difficult to find a producer who isn’t interested in a slice of the Chinese box office, set to be the globe’s most valuable by 2019.

With a burgeoning middle class among its 1.3 billion-strong population, China already has the most movie screens — with new ones popping up at a dizzying rate of 27 per day last year, according to analysts IHS Markit.

And while ticket sales have dipped slightly, the potential profits from a smash-hit in China are bigger than ever.

The latest “Fast and Furious” movie has earned even more in China than in the US and the country is in the grip of a craze for the Indian film “Dangal”, about a father who wants his daughters to become professional wrestlers.

“Chinese people have more money in their pocket and they want to pay for entertainment, to see a different life through cinema,” said Lin Jing, producer of the only Chinese film showing in the official selection at Cannes, “Walking Past the Future”.

Tie-ups have come thick and fast at the festival, with Beijing-based Jetsen taking a stake in the thriller “American Made” starring Tom Cruise, and a deal announced to sell the children’s animation franchise “Moomins” for Chinese release.

But there’s a snag: the Communist Party keeps tight limits on foreign films imported for screening in China, with the annual limit currently set at 34.

Rumours have swirled for months that Beijing is planning to expand the quota. But Jerome Paillard, director of the Cannes Film Market — a deal-making shop that runs parallel to the main festival — said Hollywood should wait before cracking open the champagne.

It remains to be seen whether Beijing “really has a strategic will to open up”, Paillard told AFP, adding: “We don’t feel for the moment that commercial relations in cinema have really taken off.”

A Cannes speed-dating event between Western producers and companies like Jackie Chan’s Sparkle Roll was nevertheless packed, with filmmakers on both sides eager to work together.

Beijing’s growing economic might has meant a flow of money going both ways. Chinese entertainment groups have made a string of high-profile investments in Hollywood in recent years, with the Wanda conglomerate paying a record-breaking $3.5 billion for Legendary Pictures, the maker of “Godzilla”, and Alibaba billionaire Jack Ma buying a stake in Steven Spielberg’s Amblin Partners.

In Cannes, there’s speculation that the big spending may have come to a halt due to a Chinese clampdown on overseas investments, which reportedly led Wanda to drop its $1 billion bid for the operator of the Golden Globe Awards in March.

And while there’s ample enthusiasm on both sides for co-productions — which under certain circumstances are able to dodge China’s foreign film quotas — producers are also asking why so many such projects have previously failed.

“The Great Wall” starring Matt Damon, a fantasy epic billed as heralding a bright new era of big-budget co-productions, was an epic flop in both countries last year, leading many to conclude it made a fatal error in trying to appeal to audiences in both East and West.

Western movie-goers want a clear story arc, he said, while in China “they’re in your face more, they’re less subtle.”

“To be very frank, most of the producers I know — American producers and Chinese producers — after one experience in co-production, most will say to me, ‘Forget it, it’s a nightmare,’” said Yang Ying, director of Movie View, a Chinese magazine and PR agency.

But that hasn’t discouraged the more determined film executives in Cannes eyeing profits in the Middle Kingdom, who said lessons had been learned from previous flops.

And for Chinese filmmakers at the world’s biggest festival, there’s hope that their country’s rise to Asian powerhouse will spark more interest in the West for movies reflecting contemporary life in China, beyond the kung fu and action stereotypes.

“There are a lot of sides to life in China,” said producer Lin Jing.

“These are going to be golden years for the Chinese cinema industry, the next 10 or 20 years,” she predicted. 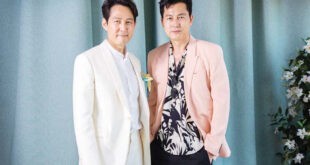 ‘H’wood’, a dazzling ode to cinema

In Cannes, making sure cinema isn’t lost in translation

New faces to stand out at Cannes

This post has been read 3967 times! This image released by PBS shows Lily Collins …