KIC to study financing options for ‘strategic projects’ of KPC

KUWAIT CITY, May 27: The Kuwait Petroleum Corporation (KPC) has signed a contract with the Kuwait Investment Company (KIC) to present a study on the optimal financing options for the strategic projects of the Corporation within the five-year plan which extends to 2040. The three-year contract is worth 168,000 dinars, reports Al-Anba daily quoting responsible oil sources.

“The KIC is mandated to provide a full study on the economic feasibility of financing oil projects from domestic and foreign banks, as well as export credit guarantee agencies, and to nominate banks and donors willing to finance major projects in the future.

The sources said the largest proportion of the funding of the oil sector strategy is worth more than $500 billion which runs until 2040 and the funding will come from local and foreign banks. The officials said, self-financing of oil projects will range between 30 and 40 percent depending on the nature of each project and the rest will come from domestic and foreign banks.

The company’s new strategy aims to achieve “the production capacity of crude oil in Kuwait stable around 4.75 million barrels per day by 2040.” The current capacity of Kuwait is about 3.15 million barrels per day. Sources pointed out that the oil sector has an ambitious investment plan underway and there are more promising future opportunities that the private sector can offer or participate in the industry in the implementation of this plan, with a total expected spending of 35 billion dinars during the next five years. “We are talking today about projects such as environmental fuels and the Vietnam refinery, which have been funded externally and internally. The LNG project will be financed externally and internally. Then there is also the Duqm refinery project,” the sources said.

On the other hand, the sources said that the KPC has signed another contract worth 165.9 thousand dinars with the British company JardineLloyd Thompson to submit a study on improving the program for the development of risks for a period of 6 months.

The contract will expire in August 2018. It is worth noting that the KOC aspires to achieve the strategic goals by 2040, to confirm the determination of the management of the sector to continue to lead in order to maintain the oil sector as an influential force in the national economy and the world. KPC’s Board of Directors discussed last month the financing of the company’s projects in the five-year plan, which was adopted on the basis of borrowing from local and international banks in addition to issuing bonds.

Kuwait Petroleum Corporation to borrow up to $20bn 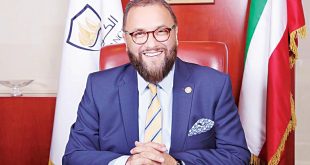