KABUL, May 3, (Agencies): Islamic State claimed responsibility for a suicide bombing in the Afghan capital, Kabul, on Wednesday that killed eight civilians in an attack on a convoy of NATO armoured personnel vehicles. The blast hit the convoy during the morning rush hour in one of the busiest parts of Kabul. Public health officials said eight civilians were killed and at least 25 wounded, with a number of civilian vehicles that were near the convoy destroyed or badly damaged.

A spokesman for the US-led NATO mission, US Navy Captain Bill Salvin, said three US service members were wounded in the attack. The vehicles, which are designed to withstand big blasts, were able to return to a base under their own power, he said.

In a statement on its Amaq news agency, Islamic State said a suicide bomber detonated an explosivesrigged car as the convoy passed near the US embassy. Although the Afghan branch of Islamic State operates largely in the eastern province of Nangarhar, on the border with Pakistan, the movement has also claimed a string of suicide attacks in Kabul. Witnesses said traces of blood and clothing could be seen on the ground at the blast site. The heavily armoured MRAP (Mine Resistant Ambush Protected) vehicles that foreign forces use to travel in Kabul appeared to have suffered only relatively minor external damage, witnesses said.

Pakistan’s army says authorities have executed four militants convicted by military courts. The army says the militants, members of the Pakistani Taleban, confessed to their involvement in attacks against civilians and the military. The executions were carried out early Wednesday. Pakistan lifted a ban on capital punishment and set up the military courts to try suspected Islamic militants after a Taleban attack on a school in December 2014 killed more than 150 people, mainly children. Justice Project Pakistan, a human rights group, says 441 people have been executed since then, including at least 32 convicted by military courts. 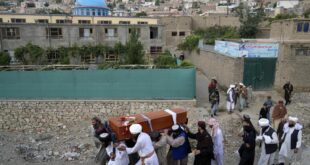 This post has been read 4391 times! RABAT, May 11, (Agencies): Kuwaiti Foreign Minister Sheikh …