KUWAIT CITY, June 13: Last week, the courts in Kuwait witnessed a number of important and remarkable rulings. The Court of Appeals ordered to cease the execution of the sentence issued against a female member of the ruling family for forging a certificate from Mansoura University. She had been sentenced to three-year imprisonment and imposed a fine of KD 300,000. She was instead released on bail worth KD 1,000, and a travel ban was imposed on her.

Meanwhile, the Court of Cassation upheld the principle of “not exempting an accused person with a mental illness from penal responsibility”. In its ruling for the appeal submitted against the sentence of threeyear imprisonment issued against the accused for broadcasting false news and publicly criticizing the country’s system of ruling, the court affirmed that, “Whoever takes voluntarily psychotropic substance and is aware of the reality of its matter, he or she will be prosecuted in the same manner as a sane person. “Mental illness with no penal responsibility is the one that threatens cognition or results in the loss of the ability to completely direct the will. “As for all other mental illnesses that do not reach the point where a person loses all his awareness or will, they are not considered as a reason for lack of responsibility”.

In parallel, the Court of Cassation has set the session of June 16 to issue the verdict in the appeal submitted against an appeal against the issued ruling in the “ambulance tender bribery” case in the Ministry of Health to cancel the sentence to imprison the vice chairman of the Tenders Committee for ten years who was previously sentenced by the judiciary to four-year imprisonment with hard labor, to support his dismissal from the job, and return the amount of KD 290,000 that he had received.

Furthermore, the Criminal Court sentenced the former undersecretaries of the Ministry of Health Khaled Al-Sahlawi and Mahmoud Al-Abdulhadi to four-year imprisonment and imposed a fine of KD 150,000 for money laundering, and bribery in a German hospital agreement. Those previously convicted were sentenced to seven-year imprisonment for bribery and forgery.

In addition, the Criminal Court acquitted a sub-tribe of Al-Dawasir, in which MP Nasser Al-Dousari and others from his tribe were accused of holding the banned by-elections in the Fifth Constituency and violating health requirements. Al-Dousari and the accused had appeared before the court, and they had denied the charges completely. Their lawyers pleaded for them and demanded the innocence of all the accused. 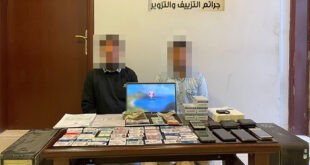 This post has been read 7608 times! KUWAIT CITY, March 7: Personnel from the Criminal …