BAGHDAD, Nov 8: Iraqi Foreign Ministry Undersecretary Hazem Al- Yousefi informed Kuwait’s Ambassador in Baghdad, Salem Al-Zamanan, of the transfer scheduled next week, read a ministry statement. Baghdad took the move in the wake of its commitment to enhancing bilateral relations, mainly in the political and economic domains, and to resolve all unresolved predicaments, the archive matter included.

It comes “after efforts were exerted to search for and gather the Kuwaiti archives, in accordance with Security Council resolution 2107,” ordered by Iraqi Foreign Minister Mohammad Al-Hakim, added the official. United Nations representatives will be in attendance during the hand over, he said. Iraqi forces looted Kuwaiti national archive, including those of TV and Radio, during the seven-month occupation of Kuwait in 1990-91.

Meanwhile, Kuwait’s Ambassador to Germany Najib Al-Bader has called for a boost of trade and investment between Berlin and Kuwait. During talks with Arab-German Chamber of Commerce and Industry President Peter Ramsauer, with Berlin being the largest recipient of investments in Europe, he remained optimistic a trade balance was achievable. Al-Bader said, so far, the stability of trade is satisfactory, adding Kuwait welcomes the further entry of German companies into its market in accordance with its 2035 ‘New Kuwait’ national development plan.

The chamber, he said, plays an important role in ushering forward economic cooperation between the Arab region and Germany, regarded the world’s fourth largest economy. 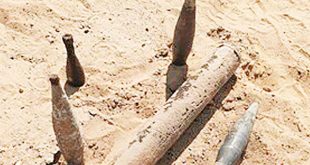 We are on verge of resolving pending issues with Kuwait: Iraq PM

KUWAIT CITY, Feb 4: Iraq paid $300 million compensation to Kuwait for the losses and …