KUWAIT CITY, April 7: In the midst of the health conditions in the country, and the state’s preoccupation in a state of political tension citizens and residents say there is an insane increase in the apartment rents which is between 600 and 800 dinars and for some apartments it is from 950 to 1,300 dinars, says Al-Seyassah.

Reliable sources told the Al-Seyassah daily the exaggerated increase in the rents is no longer limited to what the sources called ‘interior’ areas but has extended to other areas such as Al-Masayel, Al-Funaitees, Abu Futaira, Mubarak Al-Kabeer, Al-Adan, Al-Aqeelah, and the so-called remote areas. As news spread that the Minister of Municipality and Minister of State for Housing Affairs, Shaya Al-Shaya, will prevent the conversion of private housing areas into investment, the sources asked why the state does not control this aspect, and why these real estate owners crawl into residential areas and build huge residential buildings in violation of the law.

The Municipality has turned a blind eye to its regulations and permits the construction of buildings which leads to an increase in the number of tenants in private housing, which results in congestion, chaos and pressure on services. The sources regretted that a citizen is being exploited, especially those who have a long time ahead of him to obtain his right in the form of housing care.

The sources pointed out that the rent law has not been amended since 1978, with the exception of some amendments that took place last year, in light of the corona pandemic, which are minor and not substantial amendments, and that was a stumbling block to this chaos that is occurring now. The sources pointed to the intermediaries to impose service charges worth almost half the month’s rental value of the apartment or entire floor. 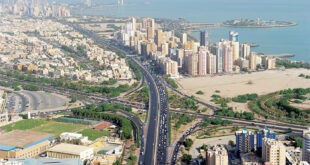 This post has been read 69426 times! KUWAIT CITY, July 6: The Ministry of Municipality …