ABU DHABI, Nov 5, (KUNA): Minister of Commerce and Industry Khaled Al-Roudhan underlined the importance of benefiting from the Fourth Industrial Revolution and fit into the new generation of globalization. In a speech at the General Conference (GC) of the United Nations Industrial Development Organization (UNIDO) in Abu Dhabi on Monday, Al-Roudhan, also Minister of State for Services Affairs said the industrial revolution brought out great developments in the Artificial Intelligence (AI) field, robots, 3D printing and digital services.

These developments can boost income rate around the world, achieve sustainable development and protect natural resources, Al-Rodhan added. Meanwhile, he warned against the economic, social, political and cultural dangers of this revolution, noting that there are expectations that over 375 million workers will need to switch to a different job by 2030.

Moreover, there are fears that it will lower the income of most individuals in high-income countries and create difficulties in dealing with the impact of climate change.

Although industry is vital to improving the lives of people, it poses dangers to environment including pollution and depletion of natural resources, said the minister. In the same context, Al- Roudhan stressed the importance of the ninth goal in the UN Sustainable Development Goals (SDGs), which focuses on industry and innovation. He added that Kuwait suggests that UNIDO would make knowledge economy, with its main feature being online trade, as the organization’s priority.

Development
He also mentioned green industries as key to social and economic development, as well as in protecting the environment, natural resources and renewable energy. It also limits gas emission and promote for recycling. Speaking on the fifth goal in the (SDGs) on gender equality, the minister said Kuwait strongly believes in the vital role of women in achieving sustainable industrial development.

Kuwait also believes that enabling women to play a role in achieving social peace and security is a step towards achieving sustainable development, he noted. The minister called on all countries, companies and businessmen to look into Kuwait’s investment opportunities.

The country is also providing banking and customs facilitations, as well as developing its commercial documents system, under the Kuwait Direct Investment Promotion Authority (KDIPA) and Kuwait National Fund for Small and Medium Enterprise Development (SMEs).

Also, he hailed the UAE’s strategy set in 2017 to prepare for the Fourth Industrial Revolution. Al-Roudhan also welcomed Palestine’s first participation in the conference as a UNIDO member-state. He also congratulated the Emirati Minister of Energy and Industry Suhail Al-Mazrouei for being elected to chair the conference.

The conference kicked off on Sunday, under the theme “innovation and communication change our future.” There are 800 ministers, officials and representatives of 170 countries participating in the event, set to conclude on Thursday. The meeting discusses policies aiming to achieve the 2030 Agenda for Sustainable Development and the 17 SDGs. 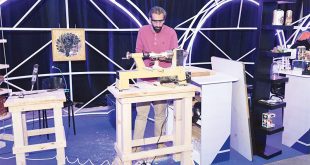