Govt keen to support industrial sector by rewarding them

KUWAIT CITY, Jan 16, (KUNA): Kuwaiti Minister of Commerce and Industry Khaled Al-Roudhan on Thursday affirmed the need to develop new industrial activities to keep pace with times and establish Kuwaiti industry that competes in regional and international markets. “We have confidence in the ability of Kuwaitis to succeed and achieve leadership,” Al-Roudhan said in his speech during the fifth edition of His Highness the Amir Award for Outstanding Factories.

He explained that numerous factories took the initiative to develop their products and adhere to quality standards in various aspects of the industry, which gave consumer confidence and security for to export of their products and increase their competitiveness in global markets.

The government is keen to support national industrial establishments by rewarding them for their achievements, he added. In addition, Al-Roudhan expressed his goal to increase the participation of the industrial sector in the local economy.

The new industrial revolution requires a comprehensive development of all sectors to keep pace with the global stakes in investment in new industries based on knowledge, innovation and sustainability, he pointed out. Al-Roudhan expressed his appreciation to His Highness the Amir Sheikh Sabah Al-Ahmad Al-Jaber Al-Sabah for his continuous support to the national industry and his patronage of this award.

The award is important nationwide in a framework of objective competition and its role in highlighting improvement in the performance of industrial companies by raising their production efficiency and providing job opportunities for national labor, Al-Roudhan added.

He stated that the award is looking to achieve two main goals; the first is to spread the culture of institutional excellence in the industrial sector in Kuwait, while the other goal urges unfortunate factories to win the award to improve their performance by highlighting their weaknesses. His Highness the Amir Award for Outstanding Factories was launched in 2002 and achieved success during its past four sessions, he noted. 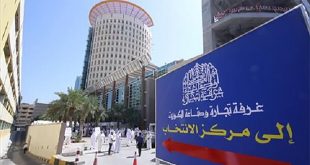 This post has been read 6601 times! KUWAIT CITY, Apr 2: Chairman of Kuwait Industries …