NEW DELHI, Aug 18, (AP): Members of India’s governing party on Monday rejected allegations that Facebook had chosen to turn a blind eye to partisan hate speech on its platform to protect its growing business interests in India.

As usage has spread across India, Facebook and its subsidiary WhatsApp have become fierce battlegrounds for India’s political parties, but spokesmen for Prime Minister Narendra Modi’s Bharatiya Janata Party denied a newspaper report that asserted Facebook officials chose not to take action against party members whose posts violated rules against hate speech.

The party members instead accused Facebook of censoring pro-India content. Opposition Congress party lawmaker Shashi Tharoor said the information technology committee he heads in Parliament will take up the findings of the Aug 14 report in The Wall Street Journal. Congress leader Rahul Gandhi accused the BJP of “controlling” Facebook and demanded a joint probe by Parliament’s two houses.

The Wall Street Journal report said Facebook India’s head of public policy, Anhki Das, “opposed applying hate-speech rules” to at least four individuals and groups linked with the BJP even though they were “flagged internally for promoting or participating in violence.” Tejasvi Surya, a BJP lawmaker and a member of the parliamentary committee on IT, rejected the idea that Facebook was showing favoritism to the governing party, and instead charged it was “censoring pro-India and pro-Hindu voices.”

“There are millions of posts mocking Hindu gods and abusing right-of-center leaders. But Facebook’s advanced algorithms and community standards fail to catch them. However, unsuspecting common people running pro-rightof- center pages are suspended with no right to appeal,” fellow BJP lawmaker Rajyavardhan Singh Rathore wrote in an op-ed in the Indian Express newspaper. Facebook said in a statement Monday that it prohibits hate speech and content that incites violence and enforces these rules globally “without regard to anyone’s political position or party affiliation.”

Campaign
Modi’s party leaders have come under scrutiny for running online campaigns laced with false claims or with vitriolic attacks on India’s minority Muslim population, posting videos or images that range from accusing Muslims of converting Hindu girls to Islam to intentionally spreading the coronavirus.

A 2019 analysis by Equality Labs, a South Asia research organization, showed that groups sharing anti-Muslim content on Facebook were supporters of Modi’s party or were linked to the Rashtriya Swayamsevak Sangh, a Hindu nationalist paramilitary volunteer organization and the ideological parent of the BJP.

“They’re pandering to the ruling party in India because they see this as a good business opportunity. They’re not concerned about the ethics of what is put out on Facebook. They’re in it for making money,” said political commentator Paranjoy Guha Thakurta, the author of a 2019 book on Facebook in India. Since coming to power in 2014, Modi’s party has increasingly used Facebook to reach voters across India.

The party has vastly outspent its main opposition, the Congress party, on social media ads. Modi himself has a huge following on social media and has asked his party’s grassroots operatives and leaders to be more active on Facebook. “BJP is far ahead of others in harnessing the power of modern communications, including social media. This is true of its presence not only on Facebook but other such platforms as well,” party vice president Baijayant Panda said on Monday, pointing to a slew of videoconferences and virtual rallies during India’s monthslong coronavirus lockdown. Panda and other BJP leaders said the allegation that Facebook was giving the governing party preferential treatment stemmed from the once-dominant Congress party’s political misfortunes in recent years.

A whistleblower at controversial data analytics firm Cambridge Analytica said in 2018 that the Congress party was a client, prompting the BJP to accuse its rival of attempting to manipulate elections. The Congress party denied the whistleblower’s allegation. During India’s general elections in 2019, which the BJP won in a landslide, Facebook, Twitter and other social media giants were asked to adhere to the Indian Election Commission’s Code of Conduct, including a ban on political ads during the 48-hour period before polling.

Polling
An Associated Press review of Facebook’s ad library, however, showed that BJP-sponsored ads ran during the prohibited window in the regions where polling was scheduled.

Congress-sponsored ads were taken down during the same period. Panda said the BJP had not violated campaign rules. It was unclear what, if anything, would come from the parliamentary IT committee review. Indian law explicitly bans hate speech, and Apar Gupta, executive director of the India Freedom Foundation, a digital rights advocacy group, said Indian courts could launch a criminal investigation into whether Facebook failed to act on known hate speech on their platform. Facebook could face penalties for noncompliance.

Meanwhile, the prime ministers of India and Nepal spoke over the phone on Saturday to try to ease bilateral tensions that have existed since a border dispute erupted between the two countries in May. Indian Prime Minister Narendra Modi received a call from his Nepalese counterpart, K. P. Sharma Oli, greeting India on its Independence Day and its recent election as a non-permanent member of the UN Security Council, a statement by India’s External Affairs Ministry said.

The border dispute between the countries began over India’s inauguration in May of a Himalayan link road built in a disputed region that lies at a strategic three-way junction with Tibet and China. “Prime Minister Oli appreciated Prime Minister Modi’s renewed priority to neighborhood as spelt out in today’s Independence Day address. The prime minister of Nepal looked forward to meaningful bilateral cooperation,’’ a Nepal foreign ministry statement said.

Nepal has been complaining that India is not responding to its offer made in November and December last year to hold official-level talks to resolve the issue. Nepal recently issued a new political map showing the disputed territory within its borders.

The brief statements issued by the two sides on Saturday didn’t say whether the two countries plan to hold officiallevel talks on the issue any time soon. India inaugurated the 80-kilometer (50-mile) Lipu Lekh road, which is the shortest route between New Delhi and Kailash-Mansarovar, a revered Hindu pilgrimage site in the Tibetan plateau. India said the road did not illegally cross into neighboring Nepal. 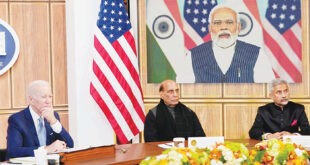