KUWAIT CITY, June 1: A Indian woman from Tirupati has sought the help of her family in India and the State (Andra Pradesh) to rescue her from Kuwait, where she has been allegedly tortured and detained her against her will. On the basis of the video clip the husband of distressed maid turned to the local media in India in hope to convey her message to Kuwait counterparts to help her.

In a WhatsApp video message Sravani of Peddavaddipalli she said, she has been held captive by visa agent Chengal Raja, after she had complained of inhuman treatment at a Kuwaiti household, where she had been working as a maid. Raja and the woman hailed from the same village.

“Unable to bear the torture at the house where I had been working, I asked him for a job change. After I had quit working, he and his partner Bawaji locked me up in a room four days ago, and have been torturing me physically and mentally,” she said in the video sent to her husband, a farmhand, reports Al Rai. She said she has been denied food also. Sravani’s family said she took up the job in Kuwait due to their financial situation.

Raja and Bawaji assigned her to a household, where she had to work from early morning to midnight, often without food, they alleged. They added their repeated attempts to contact the agents had gone in vain. 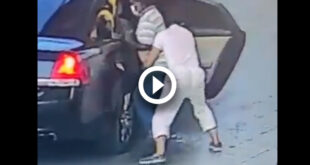