KUWAIT CITY, March 21: During the visit of Sheikh (Dr.) Ahmed Nasser Al-Mohammad Al-Sabah, Kuwait’s Foreign Minister and Minister of State for Cabinet Affairs to India at the invitation of India’s External Affairs Minister Dr. S. Jaishankar both sides reviewed all aspects of India-Kuwait bilateral relationship and discussed regional developments. They also explored ways and means to impart further dynamism in the traditional and friendly ties between the two countries, according the Hindustan Times of India. Both ministers also reviewed the latest regional and international developments, and agreed to coordinate closely on issues of mutual interest in multilateral forums.

The two sides will also jointly celebrate the 60th anniversary of establishment of diplomatic relations between them during 2021-22. Dr. Nasser also handed over a letter from Kuwait’s Prime Minister HH Sheikh Sabah Khaled Al-Hamad Al-Sabah addressed to Prime Minister Narendra Modi. During an interaction with a small group of reporters, Dr Nasser said India should help revive the Palestinian-Israeli peace process, and added, Kuwait looks to India and the world community to help revive the peace process between Palestinians and Israelis as allowing the matter to linger further could jeopardize any potential for progress, Kuwaiti Foreign Minister Ahmed Nasser Al-Mohammed Al-Sabah has said. “And it (the Palestinian issue) needs the understanding and the support of the whole international community, including India. We think that this issue has taken a long time and has produced a lot of bloodshed, violence and tragedy, but most importantly, despair in the region and among the Palestinians. We are with the peace process and the potential of reviving the peace process is very important to bring back hope for all those affected,” Dr Nasser added. Dr Al-Sabah described the Abraham Accords signed by Israel and Gulf Cooperation Council (GCC) members such as Bahrain and the United Arab Emirates (UAE) as sovereign decisions by countries regarding the conduct of foreign relations.

“Having said that, we think that the peace process is very important, we think that now it is the opportune time to revive the peace process between the Palestinians and the Israelis. We think that if we leave the peace process to linger even further it might jeopardize any potential for it to see the light of day,” he added. The talks between Dr Nasser and his Indian counterpart mainly focused on institutionalizing the wide-ranging cooperation between Kuwait and India and creating a framework to help both sides move forward in an objective manner in areas such as food security, energy, trade and investment. During the visit a Joint Ministerial Commission (JMC) was formed at the level of Foreign Ministers to strengthen further the relationship between both countries.

The JMC will act as an umbrella for all bilateral institutional engagements such as Foreign Office Consultations and Joint Working Groups. Apart from the existing Joint Working Groups on hydrocarbons, manpower and mobility, and healthcare, new JWGs on trade and investments, defence and security etc are envisaged to be established. Both ministers also reviewed the latest regional and international developments, and agreed to coordinate closely on issues of mutual interest in multilateral forums. The two sides will also jointly celebrate the 60th anniversary of establishment of diplomatic relations between them during 2021-22. Dr. Nasser took the opportunity to thank the Government of India for supplying Kuwait with 200,000 doses of ‘Made in India’ Covishield vaccines in February 2021. Dr Jaishankar expressed India’s continued support to the State of Kuwait in its fight against Covid-19 pandemic. Both sides emphasized the need to enhance cooperation in the area of health security. Dr Al-Sabah lauded India for standing by Kuwait in its “darkest moments and in our direst time”, including the provision of medical assistance during the peak of the Covid-19 pandemic last year.

He singled out the “white army of Indian nationals” – or nurses and doctors – who were combating Covid-19 alongside Kuwaitis. “Even when there was a total lockdown in India, the Indian leadership sent medical assistance to Kuwait and deployed a medical rapid response team to Kuwait last April to help in testing and treating infected people. The 15-member team was sent at the request of the Kuwait government and and this was very much appreciated,” he said. In the meantime, India is eyeing further strengthening and deepening ties in sectors such as energy, trade, healthcare, defence and security, science and technology, IT, cybersecurity, culture, education and tourism while at the same time calling for Affairs Minister invited more investments from Kuwait into India in diverse sectors including energy, infrastructure, food security, healthcare and education. 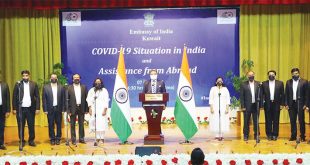 India thanks Kuwait, nations for help during hour of need 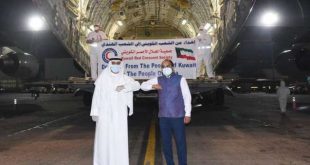 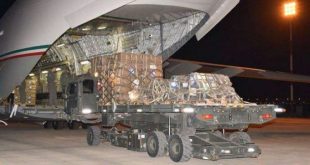 40 ton of medical supplies en route to India from Kuwait 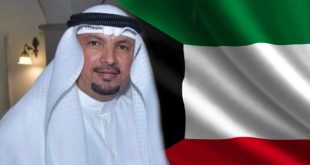 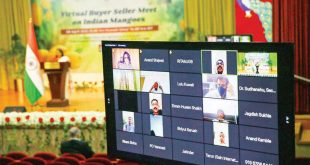 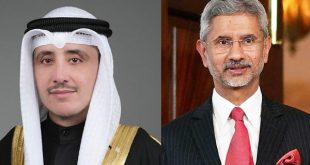 KUWAIT, April 26 : The Kuwaiti Cabinet during its weekly meeting held on Monday decided …