SHANGHAI, Sept 27, (AFP): Brazilian striker Hulk hit his ninth goal in the Asian Champions League this season but Shanghai SIPG failed to take their chances in a 1-1 semifinal stalemate with Urawa Red Diamonds on Wednesday.

Andre Villas-Boas’ side will travel to Japan for the second leg on Oct 18 still very much in the tie, but they could easily have been out of sight.

As has been the case so many times this season, the burly Hulk was Shanghai’s major threat, while former Chelsea star Oscar struck a post.

The hosts wasted the first chance of the game when Hulk and fellow Brazilian forward Elkeson got in each another’s way in slapstick fashion in the 10th minute.

Five minutes later it was 1-0 and again Hulk — leading scorer in the Champions League — was on the scoresheet, blasting the ball into the bottom corner from outside the box.

Shanghai, who are pushing for a domestic and continental treble, then went close through Elkeson as they dominated.

But the Chinese often look suspect in defence and missing two from their regular backline and their number one goalkeeper, all suspended, they allowed Urawa to equalise with their first opportunity on 28 minutes.

Yosuke Kashiwagi did the damage, nipping in first time on the half-volley to stun the majority of the more than 30,000 at Shanghai Stadium.

If the hosts were shaky at the back, so too were the visitors, who were playing in their away strip of marker-pen fluorescent yellow.

Oscar, Shanghai’s Asian-record 60-million-euro Brazilian, had two decent chances just before the break as SIPG cranked up the pressure.

The second period began as the first ended, Shanghai enjoying the possession and chances but Urawa threatening sporadically on the break.

Oscar’s nearly night was summed up on 68 minutes when his free-kick bounced off a post.

Syrian star Omar Kharbin scored a hat-trick as Saudi giants Al Hilal took a giant step towards the final of the AFC Champions League with a 4-0 thrashing of Iran’s Persepolis in their semifinal, first-leg clash.

Kharbin led the way with his treble, while veteran Yasir al-Shahrani was also on target as Al Hilal toyed with their Iranian rivals to put themselves in contention for their third continental title, after winning the event in 1991 and 2000.

Unbeaten so far in the tournament, Al Hilal were far superior to their rivals at the Mohamed bin Zayed Stadium in Abu Dhabi, establishing control right from the outset and tightening the noose as the minutes ticked by.

Brazilian Carlos Eduardo could have put Al Hilal, the most successful side in Saudi history, ahead in the eighth minute but Persepolis goalkeeper Alireza Beiranvand brought out a fine save to thwart the effort.

Nicolas Milesi also went close a few minutes later, but Al Hilal finally managed to register on the scoreboard with Kharbin heading home in the 31st minute after receiving a fine cross from Mohamed al-Burayk.

Al-Shahrani then doubled the advantage with a cracking low shot into the bottom right corner of the net from 18 yards after Salem al-Dawsari had done most of the hard work.

Al Hilal lost Abdullah Otayf early in the second half for picking up two yellow cards in quick succession, but that didn’t stop them from maintaining their stranglehold on the game.

The match was all but over in the 54th minute when Kharbin eased behind the backline to finish off a low al-Dawasari cross from the right.

Ahmad Nourollahi had a golden chance to pull one back for Persepolis but his effort was saved by Al Hilal goalkeeper Abdullah al-Myaoof.

But there was no end to the Persepolis misery as Kharbin made light of their defence to score from a low 20-yard drive past Beiranvand to complete the rout.

The two sides will meet on Oct 17 in the second leg, but the Saudis will be tempted to celebrate their spot in the final ahead of the official formalities. 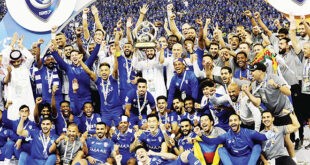