The Kuwaitis were able to clinch their first win in the tournament, which is taking place at a new arena, located in Bayan.

The sponsor of the tournament, Minister of Information and the Minister of State for Youth Affairs Mohammad Al-Jabri confirmed that this event is a distinct breakthrough to sharpen the skills of Arab players and develop them through these friendly competitions.

After the match, Al-Jabri added that the establishment of this sport event in this arena which belongs to the Sports Public Authority, also for being the first that belong to a government agency in the region and a distinguished addition to Kuwaiti sports, noting the launch of the name of late Ajil Al-Ajran to this hall due for being one of Kuwait’s history honorable and loyal figures.

The minister noted that Kuwait’s embrace of the tournament shows its interest and eagerness to develop this game in the region, expressing his best wishes to the other participating teams in the tournament. 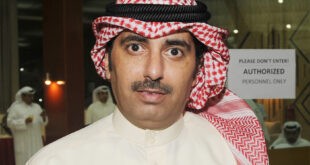