NEW YORK, Dec 17, (AP): When the coronavirus pandemic closed high schools, Broadway and TV star Laura Benanti knew it also meant most spring high school musicals would be scrapped. So Benanti asked crestfallen young people across the country to record themselves performing their songs, post them on social media and tag her. Stages might be silent, but she wanted to hear them.

The response stunned her — 15,000 submissions. “I really thought the initial sort of call to action would be quite small. I never imagined it would turn into what it did,” says Benanti, a Tony Award winner and star of shows like “Nashville,” “Supergirl” and “Younger.” The effort — dubbed Sunshine Songs — has led to a new poignant special on HBO Max led by Benanti called “Homeschool Musical: Class of 2020,” which was filmed remotely and offers a window on Gen Z.

The hour long documentary follows seven seniors and how they’ve navigated what should have been the best months of their lives. Several jumped into social activism, one experienced homelessness and one realized she was transgender. “While some of these kids dealt with such a tough time in 2020 as well as personal challenges before, it was really inspiring to see their outlook on it all,” said Jennifer O’Connell, an executive vice president at HBO Max. “Although at times, they acknowledged how tough it has been, they all shared an optimism for the future and chose to not dwell in the negative. The audience will be able to see them reclaim their 2020 with this experience.”

The seven — aged 17 or 18 — come from across the nation — Indiana, Georgia, Mississippi, New Jersey, Ohio and two from Texas. Each tells their story and sings a song that shares their experience. A teen from West Orange, New Jersey, sings R.E.M.’s apocalyptic “It’s the End of the World as We Know it (And I Feel Fine)” and one from Douglasville, Georgia, sings Gloria Gaynor “I Will Survive” with masked background dancers armed with bubble guns.

Rendition
Others sing “Pray” by Sam Smith, “My Future” by Billie Eilish, “Dog Days Are Over” by Florence + The Machine, “Lift Every Voice and Sing/I Can’t Breathe” by H.E.R. and “Somewhere” from the musical “West Side Story.”

At the end, they join for a rendition of “Waving Through the Window” from “Dear Evan Hanson.” “We really wanted a cross-section of America and not just the typical pretty princess white girl that you associate with musical theater,” Benanti says. “And I include myself in that.” Benanti and producers found the seven by starting with the thousands of submissions and whittling the list down to only graduating high school seniors, about 1,500.

They narrowed the list to about 20 candidates then cut to seven. “That was the worst part of it,” says Benanti, who personally contacted those who didn’t make the cut. As an actress, she has been in their shoes and tried to communicate that the teens not picked had done nothing wrong. “There are people performing in the subway that I’m like, ’What? Why are you in the subway and I get to be on Broadway?’ Really to me, that is just being in the right place at the right time. That is luck because there are so many talented people in this world, it’s astonishing.”

The creators originally considered making it a scripted show but pivoted into documentary after the death of George Floyd. “We all collectively agreed that it’s best to let these kids tell their own story instead of putting words into their mouths,” says Benanti.

The special highlights voices from a generation that often gets looked down on. But viewers are reminded that these young people, born around 9/11 and never knowing a world without smartphones, have endured school shootings, environmental degradation and now COVID-19. “This is the generation that self-identifies as anxious more than any previous generation. Their levels of anxiety are through the roof,” says Benanti, who is shooting a “Gossip Girl” reboot for HBO Max and “Younger” for TV Land. 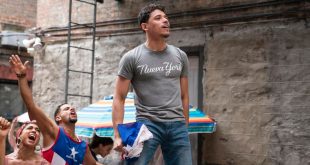 Infusion of joy in ‘In the Heights’

San Francisco musical, longest running in US, to hang up hat