KUWAIT CITY, April 19: The General Traffic Department at the Ministry of Interior announced it will start receiving citizens and expatriates from 19 to 23 of this month in the Mubarak Al- Kabeer Governorate building from 8 am to 1:00 pm to receive the driving licenses which were renewed ‘Online’ from March 11 to 29.

Share on:
WhatsApp
Share
Previous ‘Despite few workers, we are doing best to keep high level of hygiene in Kuwait’
Next ‘Lifting of curfew uncertain’ – Likely to extend 2 more weeks 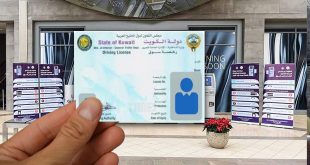 MOI to accept 30% capacity at Immigration, Traffic and Residency Affairs

MOI to launch new online service for prior booking of appointment

Renewed driving licenses will be issued from Saturday

Renewal of driving license for Kuwaitis every 15 yrs, Expats every 3 yrs