Yet even with a subject as great as Cary Grant, and a take on him that appears to have all its metaphysical Old Hollywood signifiers in place, “Becoming Cary Grant” is a murky and rather disappointing biographical portrait. The director, Mark Kidel, sketches in a fair amount about Grant’s personal life that makes him seem melancholy and vulnerable and a bit lost. Back when he was still Archie Leach, he became an actor in British vaudeville, but his mother, Elsie, a seamstress who suffered from depression, was thrown (by his father) into a mental institution when he was 11, and he grew up never seeing her, assuming that she had passed on. It was only after Grant became a movie star that he learned his mother was still alive. He made a point of getting her out of the institution and going to visit her as often as possible, trying to plug the hole in his heart that she had left. It’s telling, however, that he still didn’t want her around cramping his Hollywood style.

The movie, drawing on an unpublished memoir by Grant, also dwells on his experiments with LSD in the 1950s. When you first hear that Cary Grant dropped acid, the fact stands in such dramatic contrast to his impeccable, posh, not-a-hair-on-his-inky-coif-out-of-place image that it suggests he had a wild side, or a secret side, that the debonair screen persona was merely a cover for. But Grant’s LSD experiences were part of a rigorously supervised experiment in cutting-edge Southern California psychotherapy. He would take a tab, once a week, in his therapist’s office, lie down on the couch with a cover over him, and hallucinate his way back into his subconscious self. He found the experience to be frightening, liberating, and healing. But this wasn’t about Grant tripping out by seeing Lucy in the sky with diamonds — it was more like psychoanalysis on earnest overdrive.

All of this colors in — a bit — the person Cary Grant really was. Yet for a documentary that dares to plumb the inner life of a movie star whose peculiar magic is that he seemed to be the sum of his outward gestures — diction, manners, that habitually perturbed cocked-eyebrow reticence — “Becoming Cary Grant” leaves too many questions unanswered. The principal one is about Grant’s sexuality. The movie never mentions the period in his life when he lived together with Randolph Scott in the ‘30s, a friendship long rumored to have been an active love affair. Maybe it was, maybe it wasn’t. But Grant, who was married five times and was so handsome that Pauline Kael described him as the most pursued male of the 20th century, was a person haunted by the fragility of his romantic temperament, and the film is astonishingly vague on this and all related matters.

It does offer a serviceable chronicle of Grant’s development as an actor. The movie traces his growth from the early days when he had no idea what he was doing to his experiences on the set of the “The Awful Truth” (1937), where director Leo McCarey used his own proclivities as a ladies’ man to bring out the essence of the Cary Grant we know, to his creative leap into the screwball lunacy of “Bringing Up Baby” (1938), where director Howard Hawks had the genius to recognize that the Grant personality was never more universal than when he came off like an aristocrat who’d just arrived from the far side of the moon. Oddly, the film leaves out “His Girl Friday” (1940), the insanely fast-talking newspaper comedy that saw the perfection of Grant’s stylized romantic attack, but it is spot-on in recognizing that the movies he made with Alfred Hitchcock — “Suspicion” (1941), “Notorious” (1946), “To Catch a Thief” (1955), and “North by Northwest” (1959) — were the apex of his artistry.

Even here, though, there’s an insight that you may end up quibbling with. Hitchcock, who still gets tarred with that “actors are cattle” line, was, in fact, one of the greatest directors of movie actors who ever lived. And what he brought out in Grant, beginning with his decision to cast him as a wife killer in “Suspicion,” was something of monumental brooding conflict and depth. In “Notorious,” Grant’s crisp ardor was shot through with haunted longing. “Becoming Cary Grant” argues that what was being revealed there was, to a degree, the “real” Cary Grant.

Yet if you think about it, the emotions that defined Cary Grant in Hitchcock’s films were remarkably similar to the qualities that emerged from James Stewart when he worked with Hitch in “Rear Window” and, especially, “Vertigo.” And no one confuses that quality of on-screen obsession with the real James Stewart. What “Becoming Cary Grant” leaves you with isn’t the mystery of an actor’s personality laid bare. It’s the revelation that he was even more of an actor — in life, and in the movies — than we might have thought, to the point that he shields himself from being revealed by this film almost entirely.

LOS ANGELES: Tom Cruise combines piloting skills and charm in the first trailer for Universal’s drug-running drama “American Made” as he crash lands a small plane full of cocaine in a suburban neighborhood.

After he gets out of the plane, covered in cocaine, he flashes the usual dazzling Cruise grin and begins handing out cash to youngsters and saying, “You never saw me.”

In the film, Cruise portrays 1980s pilot and hustler Barry Seal. “I was running drugs for the CIA, the DEA and Pablo Escobar,” he says in a voiceover.

The film made headlines two years ago when a plane carrying crew members crashed on the set in Colombia in September 2015, killing two people and seriously injuring a third person. Local authorities believe that bad weather caused the twin-engine Aerostar to crash.

Cruise was in production on the movie at the time of the incident, but was not on the plane. Universal decided last August to change the title from “Mena” to “American Made,” and move it from Jan 6, 2017, to Sept 29, 2017. 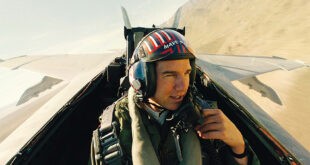 ‘Top Gun’ sequel back in the danger zone