‘He forced me to have sex with him’ – Maid, Kuwaiti woman harassed

KUWAIT CITY, Feb 14: A 31-year-old Kuwaiti woman has lodged a complaint with the Salmiya Police Station accusing a young man of having sex with her against her will, reports Arab Times daily. The complainant said she befriended the youth and he invited her to a birthday party in his home in Salmiya. She added, when she went to his apartment she found no one else except him and her and in the course of time he forced her to have sex with him. The woman has been referred to Forensics. Police are investigating since and the incident reportedly took place about 12 days ago.

‘Maid harassed’: A Kuwaiti citizen lodged a complaint at Abdullah Al-Mubarak Police Station against an unknown individual who harassed his Asian housemaid, says Al-Seyassah. According to security sources, the citizen went to the police station along with the housemaid and reported to securitymen that his housemaid was walking on a road in Abdullah Al-Mubarak area when a vehicle pulled up next to her and the motorist started harassing her. The suspect eventually fled from the location when she requested help from passersby.

Meanwhile, a Kuwaiti woman lodged a complaint at Nugra Police Station against an unknown individual who has been calling her on her mobile phone and sending her love messages. She gave securitymen the phone number of the suspect. Investigations have been launched to identify the suspect in order to take necessary legal measures against him. 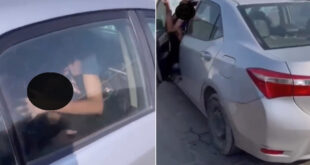