NEW DELHI Dec 19: Tens of thousands of Indian farmers gathered in Ramleela Maidan in capital New Delhi to protest against anti-farmer policies of the central government. The Press Trust of India said quoting Bharatiya Kisan Sangh (BKS), an affiliate of Rashtriya Swayamsevak Sangh (RSS) which is organising the protests, that around 100 thousand farmers are expected at Ramlila Maidan in the national capital to demand change in government policies on farmers issues.

Minimum support price for their produce, removal of Goods and Services Tax on agriculture inputs, increasing farmers financial aid, permission to produce genetically modified crops and an appropriate export policy are the major demands of the farmers. The BKS which is organising the strife said “the government will face trouble if it did not heed the farmers’ demand in time”.

Delhi Police, meanwhile, issued a travel advisory fearing traffic jam due to the protest. Modi government had withdrawn several anti-farmers laws following farmers’ year-long protests. The BKS was also part of a 40 organizations’ coalition that organised the protest in 2020-21. (KUNA) 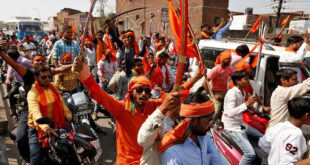