KUWAIT CITY, June 15: With the increasing rates of suicide witnessed in recent times due to exceptional circumstances created by the emergent coronavirus pandemic, especially among Asians, attention is now given to the psychological and scientific explanations for expatriates who leave their families to end their lives by their own hands.

In this regard, psychologists consider suicide an escape from reality, and giving multiple reasons for this escape, citing fear of disease, despair of life or concern for the family.

Dr Naima Taher, a professor of psychology at Kuwait University affirmed that “the large number of suicides witnessed during the coronavirus pandemic is due to extreme fear that leads to tension, anxiety and depression.

The individual commits suicide when he becomes depressed after following the news via social media networking site and could no longer bear the fear of becoming infected and dying or having the symptoms of asphyxia and lung damage, and their perception of the pain they would be exposed to if they’re infected.”

Taher added, “We cannot say that weak faith is the reason, because some of those people do not practice Islam, so the absence of faith is an important element in this issue,” pointing out that “a sense of loneliness and estrangement, and separation from family and friends who give positive energy also plays a role also in this case”.

She added that pressures of the total ban and inability to exit becomes psychologically unbearable for some people who fall into a state of depression, while anxiety and fear for the family constitute pressure that may lead to suicide.

For his part, Professor Mohammad Salem Al-Hillieli disclosed that people differ in the ways of dealing with crises, because mankind has completely different souls and individual differences, so their positions differ, especially in their reaction to crises and problems, as we are currently facing in the coronavirus pandemic all over the world. It includes the weak, some of them lack personality, some of them are mentally disturbed, some of them have psychological complications, and some of them do not have experience of life.

Al-Hillieli considers suicide escape an “unbearable reality”, because its victim could not differentiate between logic and reality nor define himself until the moment of suicide. His belief in God was not strong, and naturally, he did not trust himself because he felt despair and miserable. “On the other hand, I hold the government responsible for the existence of this phenomenon, because it must not be silent and aloof about the issue of loose labor that has been lingering for a long time. They must either be given a decent life or refused entry into the country, because the government must benefit from the presence of an expatriate in Kuwait. The expatriate worker himself must benefit, but sadly, this has not been implemented so far. Rights and justice are required to confront this phenomenon.”

Share on:
WhatsApp
Share
Previous Anti-corruption body, Public Prosecution to follow up reports on human trafficking cases
Next Mead fish back early to cover for shortages 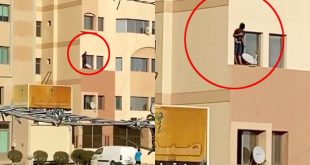