KUWAIT CITY, April 17: When the government boasts of digital transformation of its facilities and institutions, overcrowding and long queues do not go hand in hand with the era of e-government. This is the most prominent of what was revealed by Al-Qabas daily during its tour of the Expatriate Labor Center in Shuwaikh where hundreds of workers have to wait for a long time in big queues for their turn to enter the center for medical test and to add insult to injury they have to wait for long hours in the heat of the sun in the midst of fasting.

Despite the return to normal life and official working hours in government institutions and departments resuming full duty hours following lull in Corona infections, there are departments that still experience crowding, big queues, and difficulty in entering and completing their transactions.

“The Examination Center for Expatriate Workers in Shuwaikh continues to suffer and many expatriates are forced to come to the center before the start of official working hours to just to ensure they fall in queue to get their transactions completed which is a source of fatigue not only for the visitors and employees alike during Ramadan and the delay in conducting medical examinations or getting results has serious consequences for the company or the sponsor, especially if the expatriate’s entry visa expires. In what a health source revealed that more than 1,200 personnel have been appointed to work in 4 centers to examine expatriate workers, but this number is not sufficient and added the problem can be partially solved by establishment another center in the Al-Sabah health area.

The daily monitored the work atmosphere at the center and a number of expatriates said they are racing against time to reach early at the center, despite the heat and fasting. They pointed out that after easing the restrictions that were imposed during the Covid-19 pandemic, things should have been better and moving faster in health departments and not the other way around. The visitors said in the mornings especially there is a big crowd because a majority of them are domestic workers or those who have come on family visa as well as the failure to complete the transactions soon on the same day, and for various other reasons 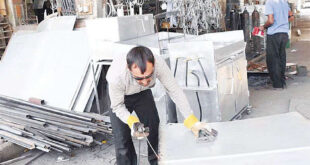 This post has been read 53561 times! Shortage of skilled and experienced manpower KUWAIT CITY, …