KUWAIT CITY, Oct 26: According to senior government sources, the health authorities will not hesitate to impose a partial curfew if seminars, gatherings and meetings for the candidates for the National Assembly elections increase in the coming period, reports Al-Qabas daily.

They affirmed that gatherings are unacceptable and will lead to an increase in COVID-19 cases, indicating that compliance with the health guidelines should not be neglected, and that those who violate them will be sanctioned with the most severe penalties.

The sources explained that all government agencies, including the Ministry of Interior and the Ministry of Health, will retaliate in case of any gatherings or violations. If lockdown is imposed, it will be lifted only a day before the election day. This is aimed to preserve the health safety of all the people in Kuwait. The government will not hesitate to take any action it deems appropriate for the sake of everyone’s health.

Regarding the most important proposals discussed at the recent election committee meeting, the sources affirmed that the application of health measures and health security is the primary concern to protect everyone.

They revealed that the most prominent proposals include putting in place a voting mechanism for those infected with COVID-19 or are in quarantine by providing the facility of setting appointments for them and specific locations.

The sources said one of the most important mechanisms that will be implemented is the increase in the 48-member committees from 542 in the past to 590 for schools located in areas with high voter density, in order to ensure there is no overcrowding among voters.

They stressed that the number of schools to be used is 107, including five main schools, adding that the number of delegates will be reduced, as there will be nine in large classes that allow this number, and five for the smaller classes.

The sources indicated that one platform will be allowed inside the halls instead of two platforms.

They revealed that the voting mechanism for the elderly was not discussed during the recent election committee meeting, “but everything necessary for protecting them will be provided on the day of poll”. 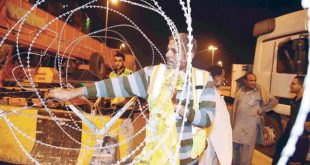