KUWAIT CITY, Feb 13: Residents of Yarmouk area witnessed a gruesome murder incident Monday evening with the stabbing of a Kuwaiti woman in her 60s. Nephew of the victim who worked as a firefighter at the Salmiya Fire Station had also committed suicide prior to the incident.

A security source said the Kuwaiti woman was found by a relative who went to inform her about the nephew’s suicide. She was lying on the floor in a pool of blood outside at the premises of her house with a broken door.

The Operations Room dispatched security operatives to the scene after receiving report about the incident but the victim had already succumbed to the stab wounds before help arrived.

The source indicated security agencies have since started investigation to determine the circumstances surrounding the incident and whether the suicide of the nephew had anything to do with the murder.

Meanwhile, police are looking for two people for impersonating police and robbing six Indians, reports Al-Rai daily. A security source said the impersonators broke into their apartment and beat the six men after accusing them of crimes they had not committed. Then they took their cell phones and ordered them to show their wallets and escaped with KD 650, their civil IDs and some car keys. A case has been filed at the Salmiya Police Station. 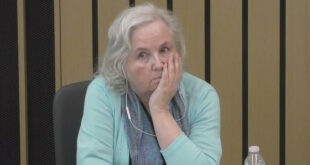