Discord erupts over retirement of over 30 years MEW workers

KUWAIT CITY, Dec 5: A list containing about 500 names of personnel who spent 30 years in government service, which the Ministry of Electricity and Water sent to the Public Institution for Social Security to consider their entitlement to full retirement pension, has incited some issues, reports Al-Anba daily. The concerns were raised by a large number of employees who have yet to complete full service in the Ministry of Electricity, given that the list sent to the Public Institution for Social Security identified the names of workers in the ministry who were born in 1970 and earlier, i.e. starting from 50 years old and not 55 years old, which fulfills the hypothesis that a large number of names mentioned in the list did not complete the total service of 30 years.

In this context, sources confirmed that the list sent by the ministry did not include the names of those whose services exceeded 30 years. They pointed out that the list was attached to another list that includes those 50 years of age to know if they served in another organization for a total of 30 years.

They explained that the ministry is working on the basis of the text of Cabinet’s decision, which provides for the referral of those whose service has exceeded 30 years to retirement, with the exception of some specialties such as engineers and others, as well as those the minister deems a need for his survival.

They said the ministry had requested in its letter to the institution to study the extent to which the names mentioned in the list are entitled to retirement, regardless of specialization, explaining that the list will be sorted out later to verify each case on its own — whether among the excluded specialties or those needed to remain on their jobs.

According to law, referral to retirement will not take place except for those who are 55 years old whose service exceeds 30 years (for women), noting the retiree gets the full retirement pension. He added that early retirement is only done at the employee’s request, so part of his pension will be deducted. Sources confirmed that this step aims to pave the way for young leaders and to motivate them to work, while creating second rows of experiences, as required by the replacement plan that aims to reduce the number of expatriates to less than 1 percent within 3 years. They reiterated that 100 employees were laid off in the past month. 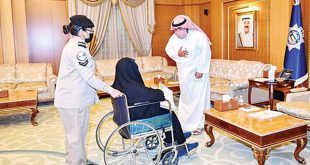 MoE to refer 85 Kuwaitis and 35 expats for retirement