‘Deportation’ for Egyptian expat in KD 155,000 financial case – ‘Jobless people not to get weapons licences’

KUWAIT CITY, May 6: Acting on information and armed with a warrant issued by the Public Prosecution, personnel from the Sentences Enforcement Department raided an apartment in Farwaniya and arrested an unidentified Egyptian who was wanted by law, reports Al-Rai daily.

The daily added, the Egyptian had been sentenced in absentia to three years imprisonment to be followed by deportation in connection with a financial fraud worth more than KD 155,000. He has been handed over to the Sentences Enforcement

‘Jobless people not to get weapons licences’
Senior officers at the Weapons Collection Department are said to have discussed a number of issues related to weapons licensing, reports Al-Anba daily. According to knowledgeable sources a decision is expected to be taken not to issue weapons licences to jobless people and those who have files at the Psychiatric Medicine Hospital. The source added guns licences shall not be renewed for persons whose conduct is not good.

Personnel from the Criminal Evidences Department have lifted fingerprints to identify the culprit. Security officers at the Central Prison have arrested an unidentified Asian working for a cleaning company for attempting to smuggle a cell phone into the facility, reports Al-Anba daily.

The daily added, during interrogation he admitted to smuggling the phone on behalf of an inmate. The Asian has been handed over to the Sulaibiya Police Sta 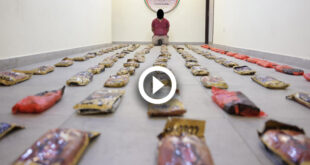 This post has been read 4093 times! KUWAIT CITY, July 17: An Egyptian died following …