KUWAIT CITY, July 31: MP Fayez Al-Jomhour reiterated his call for Deputy Prime Minister and acting Minister of Interior and Defense Minister Sheikh Talal Khalid Al-Ahmad to deport Iranian Shiite scholar Ahmed Al- Sherazi for offending the Companions of Prophet Mohammad (PBUH). Al-Jomhour affirmed his support for the pro-reform decisions of the minister; but the latter has not responded to his call so far and if this continues, he will use his constitutional tools to address the issue.

In addition, several MPs lauded the recent decisions of the minister; such as increasing the age requirement for those wishing to apply for admission to Ali Al-Sabah Military College and Saad Al-Abdullah Academy for Security Sciences to 30 years regardless of the date of obtaining the secondary stage certificate. The decision also paved way for highly qualified graduates (all specializations) and those who hold university degrees to apply for admission to military institutes The parliamentary Health Affairs Committee will discuss Monday the proposed inclusion of Celiac disease – a digestive and autoimmune disorder that could damage the small intestine – to the list of chronic diseases, which is currently used as basis for declaring the patients disabled. The proposal includes the establishment of a specialized center for research on Celiac.

The committee will also meet with representatives of the concerned authorities and laboratory technicians to talk about the government’s enforcement of Law No. 70/2020 about regulating medical jobs. MP Muhammad Al-Hewaila asserted that such decisions will give more Kuwaiti youths a chance to join the military forces. MP Ahmed Mutei Al-Azmi said the decision entails that the minister is keen on serving in the interest of citizens. He praised the decision to increase the age of applicants from 17 to 30 years old, while setting the minimum height requirement to 165 cm.

MP Abdullah Al-Turaiji urged the minister to continue toeing the path towards reform by taking the legal steps to cancel conscription as it has been proven useless. He said the budget for conscription should be spent on generating more job opportunities for the youths. By Saeed Mahmoud Saleh Arab Times Staff 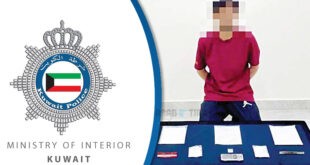