KUWAIT CITY, Feb 5: The free ration supplies to the front-line workers will be distributed from March 6. The Ministry of Commerce and Industry has identified a number of wedding halls from where the ration will be distributed but the names of these centers will be announced at a later date, reports Al- Anba daily. “The Ministry of Commerce and Industry has set next March 6 to start disbursing free supplies to front line workers” after the end of the National Day and Liberation Day and Isra and Mi’raj holidays, which begins on February 25 and ends on Thursday, March 3, say the sources.

In the same context, an official source in the Ministry of Commerce and Industry said the ministry has not yet finished counting the total numbers of beneficiaries of this grant, especially as it includes workers in the ministries of Health and Interior who live with their families, and work is currently underway to count the number of workers and their first degree families members.

Share
Previous Minister of Justice suspends services of all those accused in suspicious renewal of contracts
Next Does OPEC+ have enough oil to stop surge in prices? 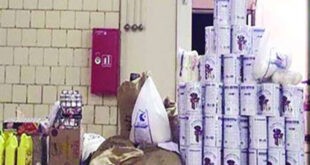