KUWAIT CITY, April 9: Private Security Sector and General Administration of Customs confiscated 14 containers filled with explosives and fireworks that arrived at Shuwaikh Port from overseas, reports Al-Seyassah daily. In a press statement issued by Ministry of Interior, Department of Public Relations and Security Media explained that a tipoff was received about containers with illegal items arriving in Kuwait.

Immediately, General Administration of Customs coordinated with the Investigation Department at Shuwaikh Port and the movement of the containers was monitored until they arrived at the port. It revealed that the import of all types of explosives is banned in Kuwait as per customs law No. 49/2002, adding that each container had items worth KD 500,000, and the items in all the 14 containers were worth a total of KD 7 million.

Acting Assistant Undersecretary for Private Security Affairs at Ministry of Interior Major General Shukri Al-Najjar, Director of Explosives Department Colonel Abdulwahab Al-Yaqout and other high-ranking officials were present at the time of offloading the containers. 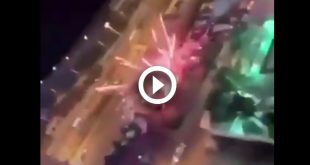