KUWAIT CITY, May 14: As the Ministry of Health continues its preparations to open a new labor examination center at the Mishref Exhibition Grounds, the past few days saw hundreds, if not thousands of expatriate workers converged on the labor examination centers in Shuwaikh and Jahra causing traffic jams in the vicinity of the two centers, as well as the citizens facing a difficulty in completing their transactions, reports Al-Qabas daily. To add insult to injury company representatives join the queue and that makes matters even worse because they come with a bunch of requests and there are those who push their way through wasta.

The visitors, through the daily, has called for an urgent inauguration of the new center in Mishref, to ensure that their transactions are completed quickly and eliminate long queues, which have become a chronic phenomenon that the labor examination centers suffer from. The visitors said they have no option but arrive at the center early in the hope of getting their transactions completed although they book an appointment via the prebooking system, but there is weakness in the system.

The visitors explained that the appointment booking system is currently under great pressure, which has led to the difficulty in getting appointments to the examination centers. They added, no appointments are currently available until May 26, which is a long period that may expose the sponsor to a financial fine, due to the delay in completing the medical examination procedures and waiting for results of tests before the expiry of the entry visa.

According to the visitors, the duration of the last Eid holidays negatively affected the completion of transactions. They pointed out that accelerating the pace of results of tests is the best solution and the best way to end their suffering, especially with the onset of the summer season. They explained, that some centers are witnessing a stumbling block to complete the transactions for reasons beyond the control of the employees sometimes, such as the failure of the computer system for a limited period, noting that the time factor is very important for the visitors so that they don’t automatically become violators of the residence law for no fault of theirs. Officials in the Ministry of Health told the daily what happened at the medical centers was expected because of the long Eid Al-Fitr holidays. 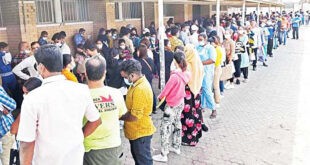 Indians 24% of workforce in Kuwait, 437,100 total without domestics