KUWAIT CITY, July 18: Minister of Finance Barak Al-Shitan said the contract signed by the Customs General Department and a certain company in 2005 was referred to a neutral investigation committee headed by a consultant in the Fatwa and Legislation Department, in response to a National Assembly member’s recent statement about the contract, reports Al-Rai daily.

Al-Shitan expressed appreciation for the cooperation between the executive and legislative authorities in a manner that protects Kuwait and its public funds from suspicions of financial corruption, in compliance with the directive of His Highness the Prime Minister Sheikh Sabah Al-Khalid to combat corruption in government agencies.

On the other hand, Al-Shitan adopted the recommendations of the fact-finding committee regarding one of the contracts of Tourism Enterprises Company and referred them to Managing Director of Kuwait Investment Authority Farouk Bastaki for implementation. 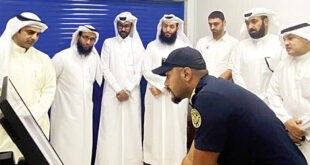 KUWAIT CITY, Sept 15: The committee for support and oversight of business organizations in the …