KUWAIT CITY, March 14: Kuwait’s Constitutional Court Sunday annulled membership of MP Bader Zayed Al-Dahoum paving way for by-elections in the Fifth Constituency to fill in his vacant seat, a court ruling said. The court, chaired by justice Mohammad bin Naji, ruled in favor of a law suit contesting parliamentary membership of Al-Dahoum and thus annulled his membership as a representative of the Fifth Constituency. Earlier, several citizens filed an appeal against the parliamentary membership of Al-Dahoum on grounds that he was previously convicted of offending His Highness the Amir. 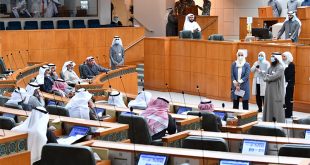