KUWAIT CITY, April 7, (Agencies): In the midst of escalation of Western sanctions against Russia for invading Ukraine and Moscow denying access to the global financial system ‘Swift’, local companies in Kuwait are settling the payments of their purchases from Russia, by first transferring the money to China and from there it is transferred to Moscow, reports Al-Rai daily. Informed sources told the daily “some Kuwaiti companies have found the best way to settle their payments with Russia without violating the embargo by opening a bridge for their financial transfers from Kuwait to China, which allows organizing the movement of their payments back and forth, if any.

The investments of the Kuwait Investment Authority in Russia and Ukraine are negligible, in addition to the fact that government imports are also limited and are concentrated in grains, especially wheat and barley and often Kuwait has resorted to alternative markets to make up for the shortage. Rising food prices as a result of the Russian invasion of Ukraine are increasing the risk of malnutrition of millions of children in the Middle East and North Africa, the U.N. children’s agency warned Thursday. UNICEF added that families are struggling to put food on the table during the Muslim holy month of Ramadan, when observant Muslims abstain from eating and drinking from sunrise to sunset.

Countries in the Middle East and North Africa have been hard hit by wars and poverty and the coronavirus has only made things worse. Russian troops began invading Ukraine on Feb. 24, and since then, intense fighting in different parts of the country has disrupted food exports. Since the invasion began, Western countries have imposed crippling economic sanctions on Russian institutions. Ukraine and Russia account for a third of global wheat and barley exports, which countries in the Middle East rely on to feed millions of people who subsist on subsidized bread and bargain noodles. They are also top exporters of other grains and the sunflower seed oil that is used for cooking. UNICEF warned that if the situation continues, it will severely impact children in the region, especially in Egypt, Lebanon, Libya, Sudan, Syria and Yemen, countries that were struggling with conflicts and severe economic crises even before the war in Europe began.

Plea for weapons Ukraine told residents of its industrial heartland to leave while they still can and urged Western nations to send “weapons, weapons and weapons” Thursday after Russian forces withdrew from the shattered outskirts of Kyiv to regroup for an offensive in the country’s east. Russia’s six-week-old invasion failed to take Ukraine’s capital quickly and achieve what Western countries say was President Vladimir Putin’s initial aim of ousting the Ukrainian government. Russia’s focus is now on the Donbas, a mostly Russian-speaking region in eastern Ukraine.

In Brussels, Ukrainian Foreign Minister Dmytro Kuleba urged NATO to provide more weapons and help his wartorn country prevent further alleged atrocities. Ukrainian authorities are working to identify hundreds of bodies found in Kyiv’s northern outskirts after Russian troops withdrew and to document evidence of possible war crimes. “My agenda is very simple. … it’s weapons, weapons and weapons,” Kuleba said as he arrived at NATO headquarters for talks with the military organization’s foreign ministers. “The more weapons we get and the sooner they arrive in Ukraine, the more human lives will be saved,” he said. While NATO is striving to avoid actions that might draw any of its 30 members into a war with Russia, Secretary- General Jens Stoltenberg urged nations that belong to the Western alliance to send Ukraine more weapons, and not just defensive arms. Western countries have provided Ukraine with portable anti-tank and anti-aircraft weapons, but they have been reluctant to supply aircraft, tanks or any equipment that Ukrainian troops would have to be trained to use.

Moscow announced more than a week ago that it planned to concentrate its forces in the east, and they have largely withdrawn from Kyiv and the north. Growing numbers of Putin’s troops, along with mercenaries, have been reported moving into the Donbas, where Russia-backed separatists have fought Ukrainian forces for eight years and control some territory. Ukrainian Deputy Prime Minister Iryna Vereshchuk urged civilians to evacuate to safer regions before it was too late. She said Ukrainian and Russian officials agreed to establish 10 civilian evacuation routes Thursday. The change of Russia’s focus brought relief to Chernihiv, a city near Ukraine’s northern border with Belarus that was encircled and cut off for weeks, The departed troops left behind twisted buildings and traumatized residents, who clambered over rubble and passed cars destroyed by the fighting. Dozens of people lined up for food, diapers and medicine Thursday at a shattered school now serving as an aid-distribution point. The blackboard in one classroom was chalked, “Wednesday the 23rd of February – class work.” Russia invaded Ukraine the next day, besieging Chernihiv as its troops tried to sweep south towards the capital. “At last we can bring food,” said Viktiriia Veruha, who was distributing aid at the school. “We can now bring food, medicine, and we can evacuate people from Chernihiv, which is also very important.” Tatiana Nesterenko, who left the city and crossed to Medyka in Poland, joined more than 4.3 million refugees who have fl ed Ukraine since the war started. “We spent 40 days in a basement,” she said. ”Our home was destroyed by an airstrike. … Many people are homeless now, and there were a lot of victims. There was no help, no volunteers for us. We extinguished the fire by ourselves.” Britain’s defense ministry said Thursday that Russia was targeting the “line of control” between Ukrainian-held and rebel-controlled areas in the Donbas with artillery and airstrikes and hitting infrastructure targets around Ukraine to wear down the Ukrainian defense. 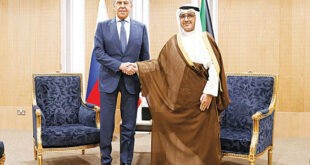 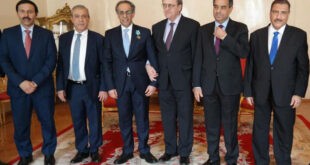