LOS ANGELES, March 20, (AP): “CODA” won the top prize at Saturday night’s Producers Guild Awards, giving momentum to the possibility that the small film could have a big night at next week’s Oscars. The story of three adult family members who are deaf and a fourth who is not and seeks a singing career beat out bigger contenders including “The Power of the Dog,” “Dune” and “West Side Story” to take an award that — more often than not — goes on to win the Academy Award for best picture. “This movie has been an amazing ride, it was such a special one to make, there was so much love and so much heart put into it,” said Fabrice Gianfermi as he accepted the award with his “CODA” co-producers Philippe Rousselet and Patrick Wachsberger at the 33rd PGA Awards.

An American Sign Language translator, who had been off to one side of the stage throughout the night’s speeches, stood front and center during the “CODA” acceptance and another stood in front of the stage to translate for the three actors from the film who are deaf: Troy Kotsur, Marlee Matlin and Daniel Durant. “CODA,” an acronym for “children of deaf adults,” is nominated for three Oscars at the March 27 ceremony, including best adapted screenplay for writer-director Sian Heder and best supporting actor for Kotsur, who is expected by most to become the first actor who is deaf since Matlin in 1987 to win an Oscar.

After it won best ensemble at last month’s Screen Actors Guild Awards it began to appear “CODA” could get real consideration for best picture. The odds may be getting better. The top PGA award winner has gone on to win the top Oscar in three of the past four years and 10 of the past 13. Academy Award voting closes Tuesday. The PGA Awards, an untelevised show from the Fairmont Century Plaza in Los Angeles honoring producers of film and television, is as much like a company awards banquet as a typical awards show, with no speeches cut short for time or curses bleeped out.

Justice
Ninety-year-old Rita Moreno, star of the both the 1961 and 2021 versions of “West Side Story,” accepted the guild’s Stanley Kramer Award, which honors someone who has combined a career of artistry and activism. “This business has taken tenacity and hard work,” Moreno said. “Advocating for issues of social justice for the last 60 years, it’s been exhausting, exhilarating and life-giving.” Moreno said the night itself was both joyful and exhausting after taking the stage at 11 p.m. local time, nearly three hours into the show. “I was really getting tired,” she said. “My buttocks are a bit sore.” George Lucas and Kathleen Kennedy, stewards of the Star Wars universe and producers of many other notable motion pictures, were honored for their careers with the PGA’s Milestone Award.

Presenter Steven Spielberg, whose films have produced by both Lucas and Kennedy, called them “two titans” who are “still just like kids playing in a sandbox.” Lucas acknowledged that his favorite achievement may not be the most popular among his peers, including the one who introduced him Saturday. “The thing I’m the most proud of is digital cinema. That was something that I worked on for 20 years. Spent many many millions of dollars to make it happen,” Lucas said. “Some still don’t believe in it. Where’s Steven?” Spielberg, standing in the wings, acted out the operation of a traditional film camera, to laughs from the crowd.

“But we’re all friends,” Lucas said. “Summer of Soul” won the PGA’s documentary film category and “Encanto” won the award for animated movies. Both are also nominated for Oscars. In the PGA’s television categories, awards went to the producers of “Succession,” “Mare of Easttown” and “Ted Lasso.” Greg Berlanti, producer of shows including “Dawson’s Creek” and several series from the D.C. comic universe, was given the guild’s Norman Lear Award and was praised for advancing LGBTQ characters and storylines. 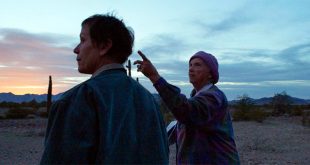