KUWAIT CITY, May 16: A new phenomenon is fast spread in our environment which does not only threatens the health of the people but pollutes the environment which can give rise to epidemics as the toxins are carried far and wide by the wind while the Environment Public Authority (EPA) fights to control this menace, great efforts must be made, within the framework of working within an integrated environmental, training and awareness program, to send across the message urging the public to adhere to the norms to protect environment and health of the people and stop dumping these carcasses in this manner, reports Al-Qabas daily.

According to statistics issued by the EPA two years ago, the amount of waste resulting from dead animals in Kabad landfill alone was 1.2 million cubic meters, and represents the highest percentages of landfill compared to other types of waste, warning of the danger of these wastes that contribute to the high rates of greenhouse gases. The most prominent of these is methane, which is one of the causes that contribute to global warming, not to mention its direct harm to humans if the quantities of methane in the air increase beyond permissible levels.

Study
The United Nations, in a scientific study supported by the United Nations Environment Program in 2021, warned of methane gas, and called for the need to reduce it, as “the most powerful way to slow climate change over the next twenty-five years, as it is responsible for about 30% of warming since the prehistoric era and the industrial age.” The study pointed out that this type of gas “is produced mainly from livestock, landfills and agriculture.”

The EPA monitors any failure of government agencies to remove animal waste and carcasses which are dumped in agricultural or desert areas, and also within residential areas which is fast becoming a phenomenon. The EPA receives reports via its hotlines of dead animals, and immediately coordinates with the Kuwait Municipality or the Public Authority for Agriculture Affairs and Fish Resources to clean the sites based on its oversight role contained in the Environmental Protection Law and its amendments. During 2021, the inspection teams in the authority recorded a set of violations against 112 stables, mangroves and farms that did not comply with the instructions and articles of the environmental law, whether by throwing waste, including animal carcasses and others with Kuwait Municipality to remove them.

The new and unpleasant phenomenon that preoccupies the minds of citizens and residents in many regions of the country that does not get the required attention from the competent government authorities is the sight of dead animals near the garbage bins in inner streets in residential areas, which is a source of danger for diseases and epidemics because some of these dead animals may be carriers of viral, parasitic or bacterial diseases. This is in addition to dead animals (pets) thrown by their owners on the roadsides in several main and internal streets, or animals that have been run over by vehicles, pose a great danger to the health of society, because their long stay in the open like this, turns them into a source of toxic gases and unpleasant odors, not to mention the ugly appearance in addition to giving rise to uncivilized behavior.

Dangers
While the Kuwait Municipality warned of the dangers of throwing dead animals in the streets to public health, it stressed that the responsibility for transporting these carcasses rests with the cleaning companies which has a contract with the Municipality, stressing that penalties will be imposed on those who throw them in the streets and squares.

As for the Environment Public Authority, it believes that great efforts should be made, within the framework of working within an integrated environmental, training and awareness program, to deliver messages urging the public to adhere to the environmental approach and to limit the dumping of animal carcasses in this way, in order to protect the environment and public health.

One of the reasons for the phenomenon’s emergence and spread in residential neighborhoods is due to the people adopting a habit of keeping and breeding pets in their homes. This is a dangerous phenomenon because most of the residents who live in apartments keep these pets inside their homes and these pets continue to live among them and here lies the danger because some of these pets may be carriers of diseases including rabies which ultimately can transmit their diseases to people around them.

Sources PAAAFR said removing animal carcasses dumped in the streets is not within the authority’s responsibility, whose role is limited to developing plans and using ways to confront the spread of stray animals in all regions and reduce their danger and reproduction, not transfer their remains to burial grounds. A source in the Municipality told the daily the contracting companies remove carcasses from the roadsides and transport them to landfill sites, while at the same time stressing people caught throwing dead animals on roads or open areas face penalties.

Share
Previous 12 mln cement bags, 331K tons of steel given to Kuwaitis in 2021
Next Ethiopians here – Call for equal salary 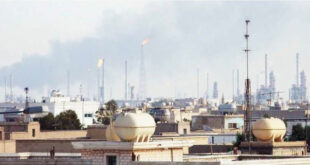