KUWAIT CITY, Feb 21: Director General of Kuwait Municipality Eng. Ahmed Al-Manfouhi revealed that the Cabinet has sent a recommendation to the Public Authority of Industry to either increase the capacity of the two companies responsible for removing the used tyres in Al-Eraiha site or add a third company for ensuring faster removal of the tyres, reports Al-Rai daily.

To the daily, Al-Manfouhi said the Cabinet’s recommendation came after discovering that the number of used types was actually 20 million and not 14 million, as was announced earlier. He indicated that the two companies working on this issue will not be able to complete the task within the allotted time of six months, revealing that a large number of tyres were discovered buried in the site.

Meanwhile, the Municipal Council has referred to the executive authority the suggestion offered by its members concerning allowing Kuwait Municipality to authorize the private sector to participate in an auction that will be held at Al-Eriaha site for selling used tyres. 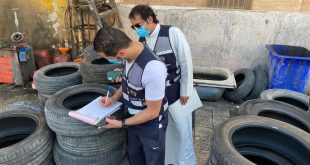 Nod to recycling of tyres