Burgan’s Asset Quality also improved in Q2’21, with the nonperforming loan ratio declining by 30 Basis Points Y-o-Y to reach 4.5%. The NPL Coverage Ratio improved from 186% in Q2’20 to 193% in Q2’21. Burgan’s Capital Ratios for Q2’21 remained well above the required regulatory ratios. The Bank’s Capital Adequacy Ratio stood at 16.5%, as compared to the regulatory minimum ratio of 11.5%. Burgan’s liquidity position remained extremely strong as reflected by 133.4% of Liquidity Coverage ratio (vs the regulatory minimum of 80%) and 102.4% of the Net Stable Funding ratio (vs the regulatory minimum of 80%) Burgan’s H1’21 results were also robust compared to the first half of last year. H1’21 Revenue increased by 4% Y-o-Y to KD 112.0mn compared to 107.6mn in H1’20.

Burgan’s Operating Expenses decreased by 4% Y-o-Y to KD 44.9mn in H1’21, driven by strong cost optimization efforts across Burgan Bank Group. Provision levels were higher at KD 38.8mn in H1’21 vs KD 32.7mn in H1’20. As a result, the bank’s Net Income increased by 6% Y-o-Y to KD 24.0mn vs KD 22.7mn in H1’20. Commenting on the results, Majed Essa Al Ajeel, Chairman of Burgan Bank Group, said “We remain very optimistic to reach community immunity as the vaccination campaign accelerates, which should lead to more opportunities to improve performance and enhance customer satisfaction. Maintaining growth while ensuring sustainability across our financial operations is imperative to consolidate our position as a major player in Kuwait. Our performance in Q2’21 was driven by stronger business momentum, leading to increased profits.

This was achieved due to the support of our shareholders, the loyalty of our customers, and the dedication of the management team and our employees to deliver outstanding results.” Masoud M.J. Hayat, Vice Chairman and Group CEO of Burgan Bank Group, noted “Burgan Bank continued to drive its digitization strategy by adding marketleading features to its online platform, further strengthened its cyber threat mitigation mechanisms, as well as launched Burgani App, the HR mobile application designed to automate HR processes. The Bank continues to invest in developing its employees and held the Design Thinking and Innovation Workshop in collaboration with The American University of Kuwait as well as launched the Virtual Holistic Banker Program aimed at preparing the bank’s professionals for future senior roles. Additionally, Burgan Bank continued to support Diraya campaign launched by the Central Bank of Kuwait to increase public awareness of banking and credit operations.” The consolidated financials encompass the results of the Group’s operations in Kuwait, and its share of results from its subsidiaries, Burgan Bank Turkey, Gulf Bank Algeria, Bank of Baghdad and Tunis International Bank. Through this regional reach, Burgan Bank has one of the largest regional branch networks with 162 branches across Kuwait, Turkey, Algeria, Iraq, Tunisia, Lebanon and a representative office in the United Arab Emirates. 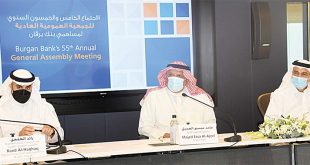