KUWAIT CITY, Jan 26: The Public Prosecution has ordered the arrest of an unidentified caretaker of a building in Jleeb Al-Shuyoukh, reports Al-Rai daily.

The order came after the British woman filed a complaint with the area police station accusing the suspect of attempting to rape her.

She told police someone knocked on the door of the apartment when the husband was not at home and that when she answered the door she saw the caretaker, who involved her in normal conversation and then suddenly grabbed her hand and attempted to kiss her.

She added, she pushed the man and screamed for help and the caretaker escaped.

A security source added that the victim filed a case of indecent assault against the man.

The caretaker has been summoned for interrogation to listen to his side of the story.

Attempted murder: Personnel from the Criminal Investigation Department (CID) have detained an unidentified Jordanian for interrogation after his wife alleged that her husband threw her down from the second floor apartment in Fintas, reports Al-Rai daily.

The husband during interrogation denied the allegation and said his wife jumped in an attempt to end her life following a dispute.

The woman has been referred to the area hospital with fractures and abrasions.

While the securitymen continue their interrogations a case of attempted murder has been filed against him.

Share on:
WhatsApp
Share
Previous ‘You won’t succeed even in win’
Next France suspends flights to china due to coronavirus 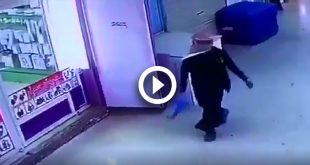 Sponsor Molests His Maid In Absence Of His Wife

KUWAIT CITY, Dec 22: The Research and Investigation sector of the Personnel from the Criminal …