The ceremony at London’s Royal Opera House opened with Imelda Staunton belting out the “Gypsy” number “Everything’s Coming Up Roses” — and the words proved prophetic. Staunton was named best actress in a musical for playing showbiz matriarch Mama Rose, while “Gypsy” took four trophies in all, including best musical revival.

Dench took the stage to thunderous applause, and declared herself “absolutely livid — because I had a bet with my grandson which I’ve now lost.”

Cranham, a veteran of five decades on the British stage, won for playing a man unmoored by dementia in “The Father” by French playwright Florian Zeller.

Cranham said that he’d felt like an underdog up against fellow nominees Cumberbatch, Rylance, Branagh and Adrian Lester.

“With that lot I felt like the little old corner shop,” he said. “They’re almost like brand names.”

Gough won for playing an actress trying to leave addiction behind in Duncan Macmillan’s “People, Place and Things,” staged by the National Theatre.

She called for the awards to recognize the theater’s diversity, saying the Oliviers were still “very white” and hailing black actresses Noma Dumezweni, Sharon D. Clarke and Marianne Jean-Baptiste, none of whom were nominated.

There was a strong Broadway flavor to the prizes, Britain’s equivalent of the Tony Awards. “Kinky Boots” — a British story given a buoyant musical makeover by songwriter Cyndi Lauper and playwright Harvey Fierstein — won three trophies, including best new musical. Matt Henry was named best actor in a musical for his starring turn as drag queen Lola in the tale of a struggling English shoe factory that finds success by making fabulous footwear for cross-dressers, and the show’s costumes also won an Olivier. Inspired by a 2005 movie starring Chiwetel Ejiofor, the musical took six Tonys in 2013.

“Hangmen,” McDonagh’s savage comedy about an executioner forced into retirement by Britain’s abolition of the death penalty, was named best new play.

Founded in 1976, the Oliviers celebrated their 40th anniversary with an exuberant ceremony that featured numbers from nominated musicals including “Guys And Dolls,” ‘’Bend It Like Beckham” and “Bugsy Malone,” a performance by a pink-haired Lauper and prize presenters including “The Hobbit” star Luke Evans, musical diva Shirley Bassey and “Game of Thrones” star Kit Harington.

This month also marks the 400th anniversary of Shakespeare’s death, and the ceremony celebrated the Bard with a musical performance of his Sonnet 18 — “Shall I compare thee to a summer’s day” — by singer Jack Savoretti.

Named in honor of the late actor Laurence Olivier, the prizes honor achievements in London theater, dance and opera. Winners in most categories are chosen by a panel of stage professionals and theatergoers.

The audience award for most popular show, decided by public vote, went to Andrew Lloyd Webber’s indefatigable musical “The Phantom of the Opera.”

Dench picked up her eight Olivier Award on Sunday, a record tally at Britain’s biggest night for theatre.

The 81-year-old scooped the Olivier for best actress in a supporting role for “The Winter’s Tale”.

“Ladies and gentlemen, I am absolutely livid as I had a bet with my grandson, which I’ve now lost and I’m never going to be allowed to forget it,” Dench said in her acceptance speech.

“I know everybody says what a wonderful time they had doing something, I can truly say this time that in ‘The Winter’s Tale’, it was an absolutely memorable time for me.”

Asked backstage if she had any plans to slow her workload down, Dench told Reuters: “Who wants to slow down? No, I want to be employed. It’s putting the car in the garage that. You will never get it started.”

“Gypsy” picked up four prizes, the most awards for a single production on the night, including best musical revival and best actress in a musical for Imelda Staunton, who opened the glitzy London ceremony in character as Momma Rose.

“Gypsy” also picked up awards for best actress in a supporting role in a musical for Lara Pulver and best lighting design.

In a category including nominees Nicole Kidman and Gemma Arterton, Denise Gough won best actress for “People, Places And Things”, a rehab drama in which she plays an addict.

In her acceptance speech, Gough lamented the lack of diversity among nominees — an issue that overshadowed February’s Oscars.

“I love this industry so much and to be given an award is fantastic but we have a responsibility,” she said backstage.

Robert Icke picked up the best director award for “Oresteia” while long-running musical “The Phantom Of The Opera” won the audience award — the sole prize voted for by the public.

The awards, celebrating their 40th anniversary, wrapped up with past winners performing “What I did For Love” from “A Chorus Line”, which won best new musical at the 1976 ceremony.

A string of big names lost out in other major categories.

In the best actor category, Benedict Cumberbatch for “Hamlet”, Mark Rylance for “Farinelli And The King” and Branagh for “The Winter’s Tale” were passed over in favour of Kenneth Cranham for “The Father”.

Had he won, Rylance would have become the first actor to hold four of acting’s top prizes in the same year — an Oscar, a BAFTA film award, a BAFTA theatre award and an Olivier.

Rylance, who sported black tie with a brown trilby hat on the Oliviers red carpet, drew global acclaim in February when he won the best supporting actor Oscar for “Bridge Of Spies”.

“Kinky Boots” lyricist Cyndi Lauper is scheduled to sing at Sunday’s Royal Opera House ceremony, which will feature performances from nominated musicals including “Guys And Dolls,” ‘’Bend It Like Beckham” and “In The Heights.”

The awards, Britain’s equivalent of Broadway’s Tonys, are celebrating their 40th anniversary this year. It’s also the 400th anniversary of Shakespeare’s death, and the ceremony is due to celebrate the Bard with a special performance of one of his sonnets.

The awards honor achievements in London theater, dance and opera, and winners in most categories are chosen by a panel of stage professionals and theatergoers.

* Outstanding Achievement in Music: “In The Heights”

* Outstanding Achievement in Opera: Chorus and orchestra of the English National Opera

* Audience Award for Most Popular Show: “The Phantom of the Opera”

* Outstanding Achievement in an Affiliate Theater: “Silent” at Soho Theatre 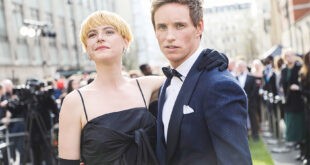