KUWAIT CITY, April 4: Deputy Prime Minister and Minister of Defense Sheikh Hamad Jaber Al-Ali said he expects the partial ban to continue during the next stage until the number of infections decrease. He added, “We are on the verge of the month of Ramadan where customs and gatherings in the holy month can lead to an increase in the rate of infections with the coronavirus, so our recommendations to the Council of Ministers is to continue with the partial curfew but with reduction in the duration of the curfew.”

This came in a statement to journalists, after his meeting with offi- cials of the Directorate-General of Civil Aviation (DGCA) at Kuwait Airport, where he confirmed that the recent partial curfew was imposed as a result of the increase in the numbers of coronavirus infections during the second wave of the pandemic, as “we reached frightening numbers of about 1,700 infections per day and the rate of infections has increased compared to the number of swabs which reached about 20 percent, so we had a big task on hand to protect citizens and residents, so we suggested to the minister of health to implement the current partial curfew, and thanks to God, we reaped the fruit.”

He went on to say, “We hope the rate of infections will decrease especially since the medical staff has given all the best and look tired because they have been working without vacation or holidays.” He revealed the project to transform the DGCA into an independent body is currently on the table of the Economic Committee in the Council of Ministers.

Sheikh Hamad Jaber Al-Ali stressed, the DGCA sector is one of the strategic sectors that contribute to the success of development plans and building a strong national economy that supports the future vision aimed at diversifying sources of income. He said, this sector creates new job opportunities for young people through the development and expansion as the government plans to enhance the capabilities of this important and vital sector by opening terminal building (T4) and the new Kuwait International Airport (T2) building. He added all these projects will contribute to enhancing the prestigious position and vital economic role of Kuwait, which in turn will support the efforts of the DGCA to overcome various obstacles that may hinder the progress of expansion, development and upgrading. 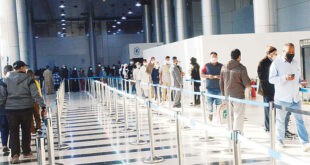 This post has been read 68618 times! KUWAIT CITY, June 15: The vaccination centers of …