It contains revenge anthems for scorned wives, a requiem for side chicks, a display of #BlackGirlMagic and support of #BlackLivesMatter, and an ode to forgiveness, all wrapped into an hourlong HBO special Saturday night that would of course land on Tidal, the music streaming service owned by hubby Jay Z, moments after the special ended.

“Are you cheating on me?” Beyonce’s husky voice intones early on. For the first half of “Lemonade”, it seems that Jay Z’s 100th problem is here, and unfixable. While Beyonce has used rumors of infidelity to fuel her music for years, from “Ring the Alarm” to “Jealous”, it seemed as if she was spilling all the tea on her much-scrutinized marriage with “Lemonade”.

On “Hold Up”, an intoxicating song with an island beat, a smiling Beyonce takes “Crazy in Love” to a new level: She smashes a bat on everything around her while reminding her man that other women “don’t love you like I love you”. Later, on “Sorry”, with a twerking Serena Williams by her side, she shows her man the stupidity of his cheating ways and all he’s lost. “Middle fingers up, put ‘em hands high, put it in his face, tell him ‘Boy bye’”.

At another point, she references her man’s desire for “Becky with the good hair” and talks about wearing his mistress’ scalp — talk about snatching edges.

What could come across as desperate instead becomes empowering, though, in part due to the poetic narrative Beyonce uses to tie each segment together, as well as the imagery, which is a defiant celebration of the beauty of black women: Dark to light, wooly hair to wavy hair, all looking glorious, with cameos from the likes of Oscar-nominated Quvenzhané Wallis, Zendaya and Amandla Stenberg.

And just as we think it’s time to start to get seriously concerned for Jay Z’s safety, he appears, nestled with his queen, in “Sandcastles”, which speaks to a troubled union but a love that transcends it.

While much of “Lemonade” would appear to tie into Beyonce’s own life, or so she would have us believe, she also draws from the angst of the black community: The mothers of Trayvon Martin and Michael Brown are seen, among others, looking somber as they hold photos of their slain sons. At another point, she tells the audience via the voice of Malcolm X that “the most disrespected woman in America is the black woman”.

Like much of her music over the last few years, the music on “Lemonade” is not made for pop radio. Besides the explicit language, it doesn’t fit into neat categories and boxes, ranging from R&B to a bit of reggae to rock and even a country twang. Paired with its visuals, it’s also elevated, becoming a work of art that has many layers to be dissected; there may well be dissertations planned on it at this moment.

It all speaks to Beyonce’s undisputed role the queen of pop — not of music, but of culture. It’s hard to imagine any other artist who could drop a project in the middle of our national mourning for Prince and still not only get attention for it, but captivate us so.

With “Lemonade”, she shows us she is King B, once again.

Beyonce has released her sixth studio album, “Lemonade”, via Tidal on the heels of Saturday’s HBO premiere of her musical special of the same name.

The film served up a mix of imagery and new songs that run the gamut from angry to defiant to celebrating the redemptive power of true love. The film arrived on HBO with little advance promo, just social media messaging from Beyonce that started last weekend.

Proving herself once again a master of marketing, Beyonce’s new set became available for streaming via Tidal, the subscription service run by her music-mogul husband Jay Z, just as the HBO special ended at 10:00 pm ET. The first song from the set, “Formation”, was released in February on the same day Beyonce appeared at this year’s Super Bowl half-time show with Coldplay and Bruno Mars. And Beyonce is launching her latest world tour on Wednesday in Miami.

“Lemonade” is billed as a “visual album” just like her previous set, “Beyonce”, which was released with no advance fanfare via iTunes in December 2013. That was before Jay Z launched his Tidal streaming service in March 2015.

The special featured voice-over narration from Beyonce telling the story of a woman’s anguish over a romantic betrayal, interspersed with clips of Beyonce performing songs revolving around themes of anger, heartbreak and defiance. One sequence included a audio clip of Malcolm X’s famous declaration “the most disrespected person in America is the black woman” intercut with images of African-American women.

The strength and perseverance of women was the dominant theme. The quick cuts offered snippets of everything from New Orleans jazz funerals and Mardi Gras Indians to young African-American men riding in a car discussing death to Beyonce lying distraught on the gridiron in an empty football stadium.

As displayed on title cards, the storyline wound through themes that included “denial”, “anger”, “apathy”, “accountability”, “reformation”, “hope”, “forgiveness” and “resurrection” and “redemption”. In one sequence, Beyonce was seen walking down a New York street swinging a baseball bat at a car and a fire hydrant. In others, she was featured in elaborate costume dresses singing gospel-flavored material.

The special featured glimpses of Jay Z and Beyonce in what appeared to be home movie footage of their wedding as well as footage of the couple playing with their young daughter, Blue Ivy.

The closing sequence features Beyonce offering a recipe for lemonade (“strain through a clean napkin”) and paying tribute to her grandmother. It also included what appeared to be footage from the 90th birthday celebration last October of Jay Z’s grandmother, Hattie White.

For all of the raw emotions on display, the film closes on a hopeful note, depicting images of a diverse mix of happy couples, including a gay couple. (Agencies) 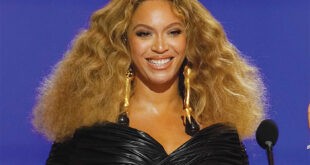 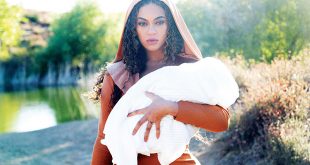