KUWAIT CITY, March 8: An Asian maid was admitted to Mubarak Al Kabeer Hospital as she attempted to commit suicide by consuming cleaning fluids. The female Kuwaiti citizen called the operations of the Ministry of Interior to save her maid from a suicide attempt.

This incident took place in the Hawally area. Immediately security men were dispatched to attend the call and on arrival they found the maid in a critical condition as a large amount of cleaning fluids were consumed. Medical team transferred her to the Mubarak Al Kabeer hospital to carry out medical procedures of washing her stomach and stabilizing her health. A case of suicide attempt has been registered and investigation has been opened for her motives in order to take legal action. 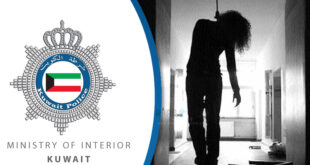 This post has been read 12996 times! KUWAIT CITY, Feb 11: A Filipina committed suicide …