No Kuwaitis among New Zealand victims

KUWAIT CITY, March 16, (Agencies): His Highness the Amir Sheikh Sabah Al-Ahmad Al-Jaber Al-Sabah on Friday sent a cable of condolences to New Zealand Governor-General Patsy Reddy on the terrorist mass shootings that targeted two mosques in Christchurch, New Zealand, which resulted in the death and injury of dozens of people. In his cable, His Highness the Amir stressed the position of Kuwait, which rejects this criminal act that has claimed the lives of innocent people in violation of all humanitarian laws, norms and values.

His Highness the Amir conveyed his feelings of sympathy towards the families of the victims, and prayed for the swift recovery of those injured in the attack. His Highness the Crown Prince Sheikh Nawaf Al-Ahmad Al-Jaber Al-Sabah and His Highness the Prime Minister Sheikh Jaber Al-Mubarak Al- Hamad Al-Sabah also sent New Zealand’s Governor- General similar cables of condolences. Meanwhile, there are no Kuwaitis among victims of the armed attacks that took place in the New Zealand city of Christchurch, the State of Kuwait Ambassador to New Zealand Ahmad Al-Wuhaib said. In a telephone contact with KUNA, the ambassador has said that there are no Kuwaiti citizens among the casualties, adding that all Kuwaiti students and diplomats in the country are safe. He urged the Kuwaitis in New Zealand to take precautions and contact the mission in case they needed any help. The United Nations Security Council adopted a statement proposed by Kuwait, which strongly condemned the New Zealand mosque terrorist attack, in which dozens were killed and wounded, as “heinous and cowardly.” Equipped with a semi-automatic weapon, a shooter opened fire during Friday prayers at two mosques in the city of Christchurch, killing at least 49 people and wounding many others.

Member nations “expressed their deepest sympathy and condolences to the families of the victims and to the Government of New Zealand and they wished a speedy and full recovery to those who were injured,” read the document, jointly put forward by Indonesia. Terrorism “constitutes one of the most serious threats to international peace and security,” added the statement, describing these acts as “criminal and unjustifiable, regardless of their motivation, wherever, whenever and by whomsoever these acts are committed.” The Security Council highlighted the need to “hold perpetrators, organizers, financiers and sponsors of these reprehensible acts of terrorism accountable and bring them to justice.” It also called on the international community to cooperate with New Zealand authorities on the matter.

Australian Brenton Harrison Tarrant, 28, a suspected white supremacist, was charged with murder on Saturday after 49 people were killed and dozens wounded in the mass shootings. Tarrant, handcuffed and wearing a white prison suit, stood silently in the Christchurch District Court where he was remanded without a plea. He is due back in court on April 5 and police said he was likely to face further charges.

Friday’s attack, which Prime Minister Jacinda Ardern labelled as terrorism, was the worst ever peacetime mass killing in New Zealand and the country had raised its security threat level to the highest. Tarrant has been described as a suspected white supremacist, based on his social media activity. Footage of the attack on one of the mosques was broadcast live on Facebook, and a “manifesto” denouncing immigrants as “invaders” was also posted online via links to related social media accounts.

The video showed a man driving to the Al Noor Mosque, entering it and shooting randomly at people with a semi-automatic rifl e with high-capacity magazines. Worshippers, possibly dead or wounded, lay on the fl oor, the video showed. At one stage the shooter returns to his car, changes weapons, re-enters the mosque and again begins shooting. The camera attached to his head recording the massacre follows the barrel of his weapon, like some macabre video game. Forty-one people were killed at the Al Noor Mosque. Police said the alleged shooter took seven minutes to travel to the second mosque in the suburb of Linwood, where seven people were killed. No images have emerged from the second mosque. Tarrant was arrested in a car, which police said was carrying improvised explosive devices, 36 minutes after they were first called.

“The offender was mobile, there were two other firearms in the vehicle that the offender was in, and it absolutely was his intention to continue with his attack,” Ardern told reporters in Christchurch on Saturday. Ardern’s office said the suspect had sent the “manifesto” in a bulk email that included a generic address for the Prime Minister, the opposition leader, Speaker of the Parliament and around 70 media outlets in a matter of minutes before the attack.

A spokesman said the email didn’t describe the specific incident and there was “nothing in the content or timing that would have been able to prevent the attack.” The staff member monitoring the accounts sent it to parliamentary services as soon as they saw it, who sent it to police, the spokesman said. The visiting Bangladesh cricket team was arriving for prayers at one of the mosques when the shooting started but all members were safe, a team coach told Reuters.

Two other people were in custody and police said they were seeking to understand whether they were involved in any way. None of those arrested had a criminal history or were on watchlists in New Zealand or Australia. Twelve operating theatres worked through the night on the more than 40 people wounded, said hospital authorities. Thirty-six people were still being treated on Saturday, 11 of whom remained in intensive care. One victim died in hospital. 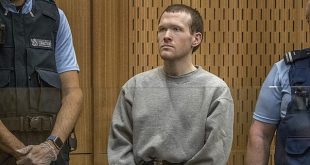 This post has been read 8176 times! CHRISTCHURCH, New Zealand (AP) – Mass shootings at …