KUWAIT CITY, March 13: All public toilets of Kuwait Municipality have been closed in the current period, based on the Cabinet’s decision to follow the precautionary measures, until the fifth stage of the plan for the return to normal life, reports Al-Qabas daily quoting sources from Kuwait Municipality.

They explained that there are 29 public toilets in all six governorates – 12 in the Capital Governorate, 5 in Ahmadi Governorate, 7 in Farwaniya Governorate, and 5 in Hawally Governorate. Regarding the lack of public facilities especially toilets, it was necessary to address the projects sector, the urban planning sector and the structural planning sector in order to propose new places near the beaches or in public markets to establish toilets.

This is because the current public toilets do not fulfill the purpose required to serve the public – the citizens, residents, the elderly, people with special needs, and visitors to Kuwait. The projects sector held several meetings with the public utilities company.

A proposal was made to allocate a site of an area of about 31 square meters in Qibla Area (Plot 3) and to study the allocation of a second site for toilets in the gold market parking in the same area. A request was made to allocate new lands to construct toilets in all governorates, in addition to allocating sites in surface parking projects in return for collecting funds for their construction and operation after the issuance of legislation.

The sources affirmed that the Municipality will not stop at this point, but will request the establishment of smart toilets in the governorates, which in turn will offer them in a private bid. They indicated that the entity concerned with the projects sector is working on the restoration and maintenance of the public toilets that fall under the supervision of the municipality in the six governorates through follow-up contracts in the governorates. The sources said proposing any places to establish new public toilets does not fall within the jurisdiction of the projects sector, which is considered an executing party if it receives any sites for its establishment in all the governorates. 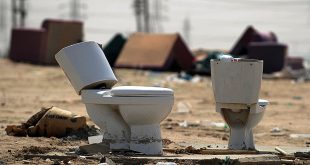 Fire fighters rescue a child trapped in a toilet