It is Albania’s national symbol, but the eagle may soon only be found on the flag. The majestic bird is threatened with extinction due to widespread poaching of raptors. On the side of a national motorway, just 30 kilometres (18 miles) north of the capital Tirana, a vendor offers motorists a common buzzard for an average price of 7,000-10,000 leks (55-85 euros, $65-100).

The buzzard is a protected species just like the golden eagle. But the man isn’t concerned as he exhibits the bird with its wing wounded by a bullet and its talons tied. “I didn’t wound it. I was given it to sell. The buyers will keep it in a cage in a bar or a restaurant,” he says.

Whether the customers want to stuff them or to keep them in captivity, they can find these birds for sale on the street. Of the four species of vultures that used to exist in Albania, “only one, the Egyptian vulture, remains and its population has been extremely reduced,” says Mirjan Topi, author of Albania’s first bird guide. So too the dwindling number of golden eagles, a two-headed specimen of which features on the flag of this mountainous Balkan country.

According to experts, some 25 years ago there were between 100 and 200 couples of golden eagles. That number today has been cut in half, “a dramatic decline”, says Topi. For biologist Taulant Bino, president of the Albanian Ornithological Society, the golden eagle “is on the road to extinction”. “Fifty years ago or even in the early 1990s, we could see it on every summit,” he says. (AFP) 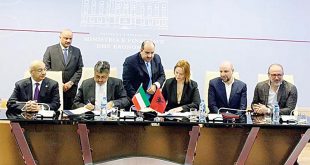