DUBAI, Nov 16, (AP): Airbus raked in more orders at the Dubai Air Show on Tuesday, reaching one valued over $3.3 billion to sell 28 new aircraft to Kuwait’s Jazeera Airways. The European plane maker’s agreement includes 20 single-aisle A320neos and eight A321neos, which competes directly with Boeing’s 737 Max, along with an option to sell another five planes to the low-cost, fast-growing airline. While the executives described the deal as a memorandum of understanding rather than a firm order, Rohit Ramachandran, CEO of Jazeera Airways, said he considered the handshake “to far exceed any immediate formal collateral” behind the agreement. “There’s a great level of trust to which honestly one could ascribe a significant dollar value,” said Ramachandran, calling it a “realistic, modest” order. The executives said the first planes should be delivered in 2026. The Kuwait-based Jazeera Airways, an upstart Middle East discount carrier, was founded in 2004 as one of the first non-government owned airlines in the Gulf while demand and competition for low-cost travel intensified in the region. In its fourth deal of the show, Airbus said it received an order of 10 narrow-body A220 jets from Nigeria’s Ibom Air, a new carrier owned by the oilrich southeast state of Akwa Ibom.

The deal, based on the plane maker’s pre-pandemic price list, is valued at some $810 million, though large aircraft purchases are typically deeply discounted. Executives declined to say how much they were paying for the planes. The frenetic trade show in Dubai typically sees a stream of order and product announcements. But this year’s exhibition, in the shadow of the coronavirus pandemic that triggered the aviation industry’s worstever crisis, has been more subdued than in the past. Most deals so far have involved small aircraft as opposed to the trademark wide-bodies that ply the longhaul routes of Gulf Arab carriers. Still on the first two days, Airbus also made blockbuster sales, selling 111 new aircraft to the Air Lease Corporation and 255 new aircraft to Indigo Partners’ various low cost carriers – a deal valued at some $30 billion, based on the pre-pandemic price list.

The purchases have signaled that airline executives see the ravaged industry gradually recovering from the pandemic, with demand for travel set to strongly increase in the coming years. Not long ago, airlines were asking for government bailouts as the virus closed borders and grounded planes. The trade show typically pits France-based Airbus and its American rival Boeing, the two manufacturers at the top of the supply chain, against each other in the crucial Mideast market filled with long-haul carriers connecting East and West. Boeing has yet to make a major order announcement at the show.

Long-haul carrier Emirates meanwhile announced that late next year it would start retrofitting 105 of its wide-body planes, including Boeing 777 and the superjumbo A380s, with a new wood-paneled comfortable cabin class called Premium Economy, which offers much more space than coach but at a lower fare than business class. At the Dubai convention center, Mohammed bin Zayed Al Nahyan, Crown Prince of Abu Dhabi and the country’s de facto leader, met with a delegation of Russian defense industry officials at the sprawling pavilion for Edge, the United Arab Emirates’ homegrown military-industrial company. The meeting comes as Russia promotes its Sukhoi Su-75 Checkmate fighter jet at the air show – its first showing outside Russia. The UAE has tried to acquire the Lockheed Martin F-35 since formally recognizing Israel last year in a deal brokered by the Trump administration, but that major arms deal has slowed under U.S. President Joe Biden. Kuwait’s Directorate General of Civil Aviation has eminently displayed current and future projects of Kuwait International Airport at 17th edition of Dubai Airshow (2021) that kicked off on Sunday. President of the directorate, Sheikh Abdullah Al- Ali Al-Salem Al-Sabah, accompanied by Saad Al- Otaibi, the deputy director general for planning and projects affairs, visited on Monday the Kuwaiti pavilion where they were greeted by Information Undersecretary Munira Al-Huwaidi and the director of the Kuwaiti section, Dr. Badr Al-Enezi. 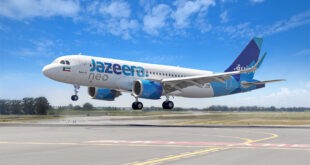 This post has been read 6923 times! KUWAIT CITY, June 28: The Chief Executive Officer …