KUWAIT CITY, Dec 26: Public Authority for Civil Information (PACI), in an unprecedented increase in its daily capacity, issued 85,000 civil ID cards last week, which is three times the usual production – in an attempt to overcome the delay witnessed in the issuance of ID cards weeks ago, reports Al-Qabas daily.

The daily quoting an informed source revealed that the increase in production with availability of 85,000 civil ID cards (ready and stored in the machines) contributed to the high number of visitors, noting people visiting the premises for the purpose of collecting civil ID cards in the past few days exceeded 30,000.

This was considered the busiest days and worst of the problems experienced by the sector so far. He pointed out that more than 90,000 civil ID cards are ready for delivery in the authority’s machines, indicating they’re only waiting for their owners to collect them inside the main PACI building.

He indicated bookings for travel and relevant issues associated with the end of year vacation have doubled the size of visitors. “The authority receives visitors currently in two periods from 8:00 in the morning until 7:30 in the evening, with the storage period for cards from 1:00 to 2:00 in the afternoon”, he noted.

The source indicated that once the raw materials were provided for the cards, the authority implemented a work plan to accelerate and double the production. He said employees of the authority were able to issue 18,103 civil ID cards on the 15th of the current month, followed by issuance of another 33,000 cards two days later.

The steady increase in the pace of production continued on a daily basis at a minimum of 10,000 cards with total average of about 92,000 in less than a week. He noted more than 42,000 people may have visited the authority from December 15 until Monday, December 23.

He expected the visitor frequency to decrease in the coming days, and to return to normal after collecting the cards issued earlier.

In exchange for their efforts to avoid any delay or damage in the issuance of civil ID cards, which happened last week due to lack of sufficient raw materials for production – leading to stacking of cards in the machines, citizens and expatriates visiting the authority suggested activation of the fine clause on late persons.

Some visitors told Al-Qabas on the sidelines of waiting for their cards that the Public Authority for Civil Information must issue a decision to activate fines for those who do not appear to receive their civil ID cards within a period of two weeks from the issuance.

Others suggested the authority should dedicate some machines to mandoubs (representatives of companies) for their transactions when receiving cards different from ordinary visitors or at least set a special time for them, given that they cause crowds.

Plan to link travel, vaccination – ‘My ID’ use advised 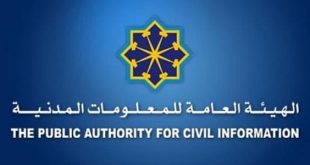 Forbidden to include profession on civil ID