‘60s’ ban decision up for rethink

KUWAIT CITY, June 7: The concerned authorities are still studying the “60-year decision” that bans the renewal of work permits for expatriates over the age of 60 and have educational qualification of high-school certification or less, reports Al-Rai daily. According to informed sources, the Board of Directors of the Public Authority for Manpower (PAM), headed by the Minister of Commerce and Industry, Dr. Abdullah Al-Salman, has finally decided to form a committee of specialists for reconsidering the decision. They said, “PAM’s adherence to the decision resulted in the emergence of a set of observations from various sides about its implementation. Also, opinions from specialized bodies were obtained to confirm the extensive damage that could be inflicted on the labor market if the decision is imple mented.” The sources revealed that the objective of the committee to be formed is to provide comprehensive recommendations about amending or canceling the decision, as well as justifications as to why each recommendation has been made in this regard, adding that the committee is expected to complete its report within a period not exceeding two weeks. They said, “The total number of expatriates on whom the decision applies is about 56,000, but the official figures indicate that the actual number is almost 86,000”.

Majority
The sources went on to say that, “The vast majority of these expatriate workers are registered with companies whose licenses are active in general trade and contracting. Some of them are skilled workers needed by some sectors, and cannot be easily compensated, despite the fact that the number of those on whom the decision applies constitutes only 2.5 percent of the workforce in the country”. They indicated that most of the meetings with the relevant authorities regarding the fees that are supposed to be approved within the expected amendments of the decision suggested an annual fee of KD 1,000 to renew the work permit and mandatory health insurance – a level they described as “acceptable and easily executable in reality”. The sources stressed that the proposals recently submitted by the Kuwait Chamber of Commerce and Industry to the authorities responsible for the “60-year decision” constitute realistic solutions that will not affect the labor market and can preserve the expertise needed by different sectors.

Share
Previous 1,479 infected with coronavirus
Next Licenses of 49 maids offices to be cancelled 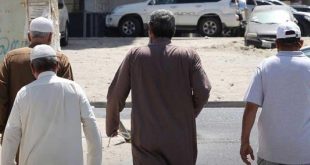